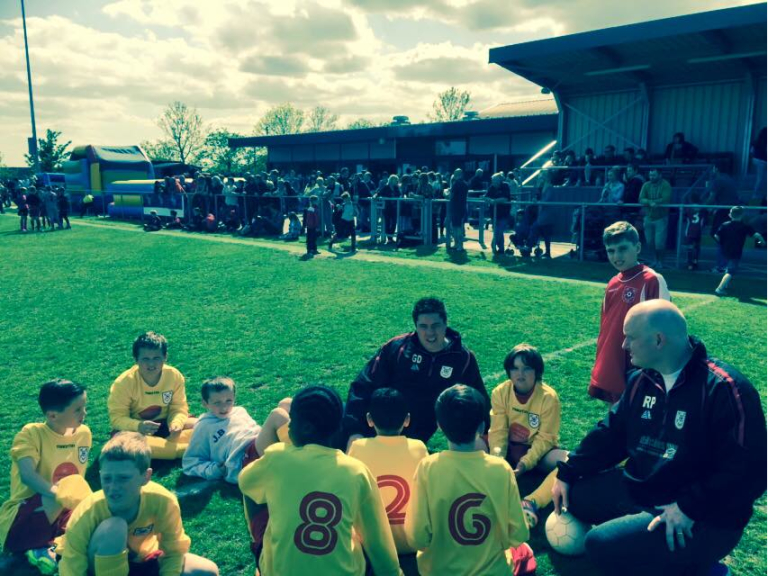 The weekend of the 16th and 17th May was an important one in the calendar of Haverhill Rovers Football Club as the community club came together for their annual youth presentation day.  Following the league matches of the U11 Boys and U11 Girls which started the day off with 10am kick offs the boys youth teams took turns at playing either an internal match with another team in the same age group or a friendly with local oppositions on the first team pitch.  At the same time the bouncy castles, fairground rides, the donut and ice cream vans all burst into life at the start of a busy day.

The New Croft facility welcomed teams, family, friends, sponsors and supporters through its doors all day as the teams played a match and then received their end of season awards.  Recognising the hard work of the players and volunteers and the support of the parents and sponsors as each team’s manager spoke about their team and season and awarded the players with campaign trophies and individual ones for supporter’s player, player’s player, manager’s player and most developed player.  Hundreds of people came to watch and celebrate the players success in developing as players, their fortunes on the pitch and there were many smiling faces as the sun shone and the day ended with a disco!

Early Sunday morning the Car Boot Sale was in full swing again as the weekly opportunity to sell off your unwanted goods or your crafts and small business enterprises started bright and early at 7am!  The volunteer staff were just recovering from the long day and disco of the presentation day as they ensured everyone had a pitch to set up and sell from.  These sales will continue every week at The New Croft until 30 August and if you want to reserve a pitch then call Pete Betts on 01440 702137 to do so.

Then late afternoon came the news that the club’s first team match day programme had won 3rd place in the Soccer Club Swap Shop Awards in the Thurlow Nunn Premier section with FC Clacton and Wivenhoe Town ahead of us.  These awards are given to programmes from International matches to Grassroot Clubs so it’s fantastic that the programme has been recognised in this way, especially as the cover design is done by one of our U13 youth players, who was also thanked for his hard work on this during his presentation the day before.  Any local company keen to advertise in the new season’s programme, which is planned to be bigger and better, either as an advert or as a player sponsor please contact Club Secretary Jules on julesankers@gmail.com with their details in the first instance.

This Community Club is growing, with new teams next season, requirements for players and coaches for a few teams are also needed so if you are a player who would like to join, come along on Saturday mornings from 10:30am and join in with our Saturday Soccer and leave us with your details.  If you are a coach looking for a team to manage then please contact the Club Secretary as above.  We are currently looking for an U14s EJA manager, three U13s managers, one for the EJA team and two for the Colts teams and also one each for a new U7s and an U8s team.  Coaching courses will be supported by the Club so if you’re keen to get involved in this growing Community Club then get in touch now!