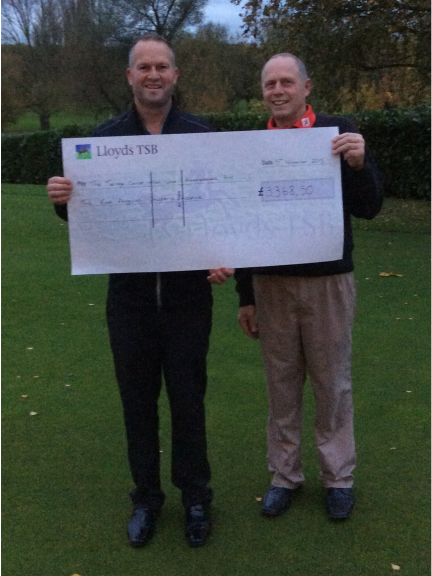 Haverhill Golf Club hosted a charity golf day back in September to raise funds for The Teenage Cancer Trust at Addenbrookes and The East Anglian Children's Hospice. The Maggie Vale Memorial Day has been played at Haverhill for five years now and is organised by club member Mr John Vale a PGA Head Professional Paul Wilby. Seventeen teams of four took part this year with the monies raised to date breaking through the £10,000 barrier, something John and Paul are very proud of. John Vale said "year on year we get great support from Haverhill members and friends who play on the day or sponsor holes. I would like to thank the staff at Haverhill Golf Club for their ongoing enthusiasm surrounding this event". This year's sum raised was £3,368.50 which broke previous records by some margin.

Ciaran's Win at The Belfry!!

Haverhill Member Ciaran Brennan took part in the inaugural Titleist Order of Merit Grand Final held at the Belfry on Friday 30th October. Ciaran, who plays off a handicap of 13  was invited to represent Ireland, due to his scores in his division amongst all the Irish golfers.  He reported back 'I had a fantastic time, and playing on the Brabazon course in this event was a once in a lifetime opportunity. It was all expenses paid including an overnight stay at the Belfry Hotel, and there was plenty of golf equipment and golf balls provided to all the competitors by event sponsor, Titleist.' Although Ciaran said he had a challenging round, he was delighted to win the Division 2 competition and to round off an excellent result, Team Ireland won the overall event. The prize presentation was given at a gala dinner afterwards and Ciaran received his prize from representatives from Titleist and HowDidIdo. All at Haverhill Golf Club would like to congratulated Ciaran on his success and are looking forward to seeing the full report that is due to be published in November edition of Golf Monthly.