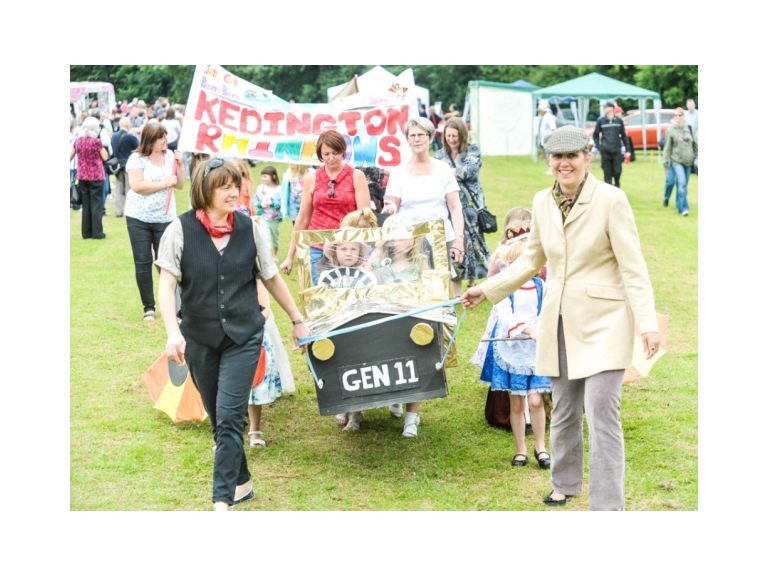 Nothing can stop the village from coming together to participate in the event of the year and to raise funds for the meadow and community centre. This years Meadowlark took place on Saturday 14th June where over 1,800 people attended!

The theme was Planes, Trains and Automobiles and thanks to the good weather the event was a huge success raising in excess of £4000! There were a wide variety of activities for everyone to try out ranging from train rides, bouncy castles and Punch and Judy stalls for the children, to clay pigeon shooting, darts and carpet bowls for the adults. If you have never been to a Kedington Meadowlark Festival I strongly advise you visit next year, you won’t be disappointed! There’s fun for all the family!

The walking pageant begins meadowlark in the main arena showcasing the variety of different groups who take part, such as the Rainbows, Brownies, Guides, Cubs, Scouts and many more. The walking pageant is watched by the whole village as families gather around to support their children and friends taking part.

Only recently has the walking pageant replaced the old moving float parade which travelled through the village before entering the arena where the judging of the best float took place. When I was younger I loved taking part in those opening moments of Meadowlark. Each year as I progressed through the Rainbows, Brownies and finally Guides it was always exciting to find out what the theme would be so that we could begin preparing the floats for the parade. As I travelled around the village in the parade I was filled with such great pride for my group and my village. Everyone waved and cheered as we past families gathered in gardens and friends on foot paths which filled me with excitement and a sense of community. Everyone takes part which is what makes Meadowlark such a successful and appreciated event!

I believe Kedington is a lovely place to live, however my opinion might be considered bias as I have lived here all my life! To me the community spirit of the village makes it very homely and the people are all more than willing to help anyone in need. Whether you are nipping to Nisa Local because you have run out of milk or are walking through a park for a leisurely stroll on a summer’s afternoon, you are more than likely to bump into a friendly face.