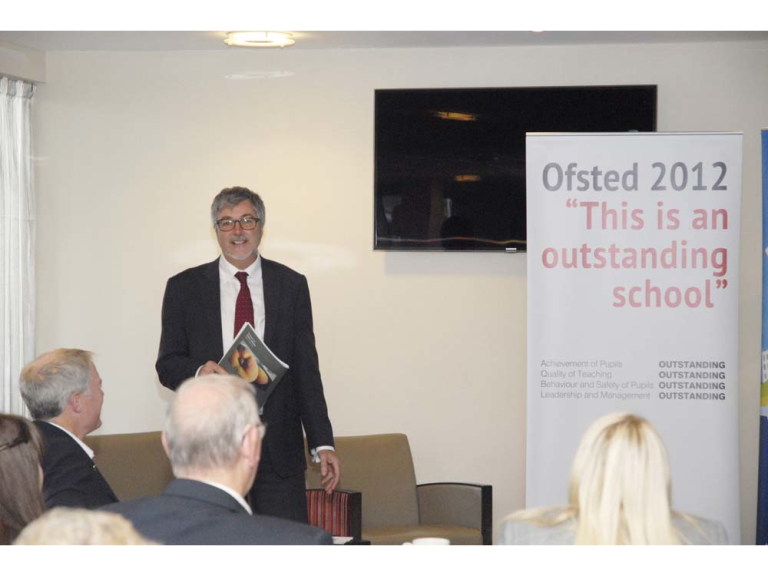 Howard’s talk was thought provoking and highly relevant for employers as well as the business owners who are parents and grandparents. He spoke about education being a moral issue nationally. Schools, family and friends are all role models for young people. Children look up to us for guidance as we help to shape their futures and their destiny. Howard strongly believes that all children are gifted and have the potential to change the world. As a result of this, all children should be encouraged and helped to achieve the very best that they can in life.

There are times when children are bound by the environment they are born into, their parents or a particular culture. Some children are disadvantaged before they can open their eyes as they are born into poverty. This is not the child’s fault and unfortunately the children in this situation can become ‘lost’ in the education system. However Howard recognises that this should not be the case. He passionately argues that pupils from any background can be great if you challenge them enough. We have the moral responsibility to support and develop all children, whatever their circumstances.

This belief can be seen throughout Howards work as the Chief Executive of the Samuel Ward Multi Academy Trust. The Trust works with six local schools enabling them to support each other and work together in order to shape their young people into successful learners, confident individuals and responsible citizens. All children, no matter what their academic abilities might be, deserve the same level of reassurance and assistance to help them reach their goals and this is what the Trust aims to provide.

The quality of education is one of the most important issues facing Britain, Suffolk and Haverhill. Our success as a nation through our prosperity, security and society, depends on how well we raise and educate our young people. We need to focus on ensuring the aspirations of the young people in our care are based on strong values and that the students are equipped with the skills they need in order to be successful as they are the future of our country.

Children in years 7 and 8 nationally are developing a more advanced knowledge at a younger age than ever before. This will be a positive for employers as a larger number of young adults will be finishing their education with higher numerate and literate skills. It isn’t just academic results that lead to a pupil gaining employment. They need to have the common sense, professionalism and independence to back it up. Businesses want to employ candidates who are confident in their abilities and show they have the entrepreneurial skills to work within a certain business. Therefore schools also need to teach young people how to use the skills they have learn and apply them in a working environment.

On a local level Howard stated that over two thirds of secondary schools in Suffolk have left the control of the local authorities however this isn’t necessarily Suffolk County Councils fault. Schools were too reliant and dependent on the local authorities to deliver the outcomes they wanted. Samuel Ward was the first secondary school to become an academy and start to shape its own future. Samuel Ward Academy is now the highest performing school in Suffolk and is always oversubscribed and attracts pupils from across the region.

By decentralising power from local authorities, schools today have more freedom than ever before but with freedom comes more responsibility and an increasing level of scrutiny by Ofsted. It is no longer possible to believe that large local authorities will provide the challenges and support schools that are not achieving need. Howard believes that schools should not depend on the local authorities or be completely independent either. Instead schools should look for a new approach, one that develops real local partnerships that respect, sustain and help each other. Howard explains, “We want to see schools that are able to shape their own character, frame their own ethos and develop their own specialism, free of either central or local bureaucratic constraint.”

It is reassuring to know that education in Haverhill is being driven by inspirational people who have such great vision and passion for our local schools and the children in their care.