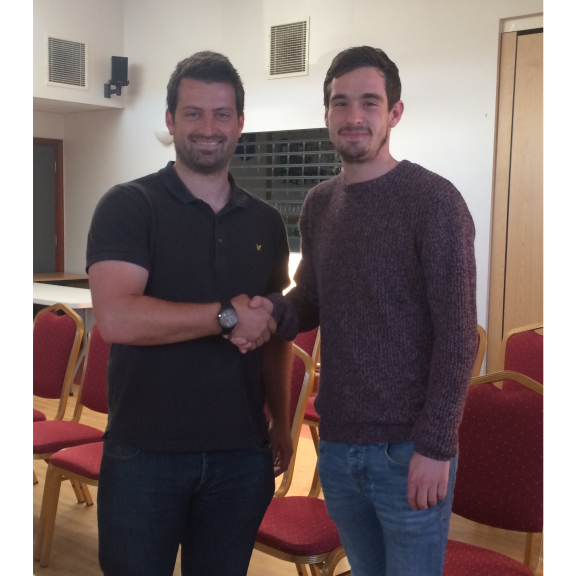 Joining the team for the forthcoming season is Ryan Weaver who tonight has confirmed that he will be donning the red kit come August.  Local lad started youth football at Long Melford before joining Rovers' Reserve team under current GK coach Michael Bavester and Barry Duffy.  He then joined Haverhill Borough to gain Step 6 football and over his 100+ appearances for them has earnt the captains armband and the tag of top goal scorer.

Talking tonight Ryan said "I'm ready now, I've played at Step 6 for a while and I'm looking for a new challenge, something to keep me developing as a player.  Talking things through with first team manager Michael Shinn he's all about developing the local lads and that's what I need, the push to do better for myself."

Michael Shinn added "I'm happy to offer Ryan the opportunity to stretch himself to the next level and his experience will also help the younger members of the team, and scoring goals is what he does."

Ryan is available for player sponsorship so if you are interested in being Ryan's sponsor then please contact Club Secretary Jules on julesankers@gmail.com for details.

Leaving The New Croft is Marc Abbott, he's been playing for Rovers for 9 years and in that time has always been a regular in the side, only injury keeping him in bay from the team sheet.  Joining from Newmarket Town in 2009 he's played over 250 league matches and many more in Cup competitions.

Marc said "the time has come to seek out a new challenge, I just wanted to freshen things up really. Freshen myself up and have a new challenge.  During my time at Rovers I've taken on coaching duties with Rovers’ youth section, helping out with the Saturday Soccer School and the Sunday Mini Kickers which I will continue."

He leaves Rovers with nothing but glowing words of praise for the club and those he has worked with, both on and off the pitch.  He said: “I would like to thank Haverhill Rovers for a great nine seasons and the people at the club, for example Jules Ankers (Club Secretary), Peter Betts and Dan Pilcher.”

Haverhill Rovers Committee and Players thank Marc for his commitment to the club over his nine seasons.