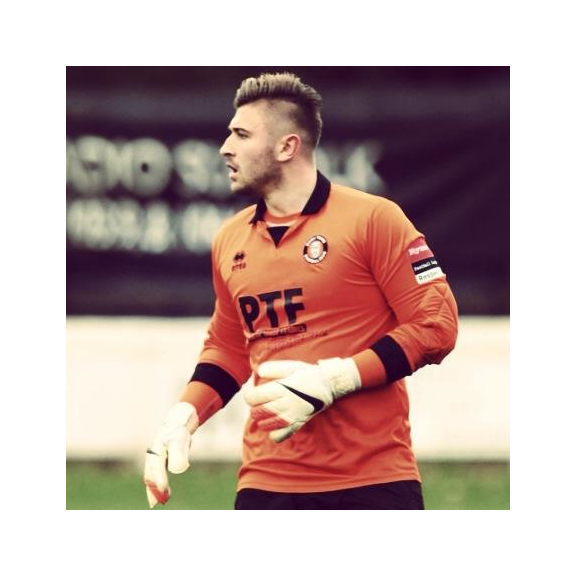 THURLOW NUNN LEAGUE PREMIER DIVISION
STANWAY ROVERS 6   HAVERHILL ROVERS 1
It was a bad day at the office for Haverhill as they came home from Essex the wrong end of a 6-1 score line, although they didn’t play bad enough to be on the end of a 6-1 result.
They went behind after 4 minutes when Jordan Palmer was left free by the static away defence to head Craig Hughes’ free kick past the helpless Alex Archer.
Archer kept his side in the game with several spectacular saves in the opening few minutes but he couldn’t do anything in the 23rd minute when Terry Rymer’s casual lay off set up Ben Newson to fire a bullet of a shot from 20 yards into the top right corner, again giving Archer no chance of a save despite him being at full stretch.
The intense pace of the game caught up and the away side were reduced to ten men on 34 minutes when Ricky Spriggs was sent off for a high challenge on Newson. Despite this his side stepped up a gear and, in first half injury time, Ryan Weaver headed on to the face of the post with ex-Haverhill ‘keeper Jack Cherry rooted to the spot.
Like the first half it took four minutes of the second for Stanway to go 3-0 up, a short cross from the right finding the run of Jake Clowsley, the ball deflecting off his side and over the line. Tye Alleyne then brought down Clowsley in the area as he burst past four players and Hughes converted the spot kick on 56 minutes to put Stanway four goals to the good.
What was Haverhill’s consolation goal arrived in the 58th minute, Cherry failing to claim Michael Shinn’s free kick as he came off his line and a scramble ensuing that ended with Alleyne putting a low shot through the crowd of players and into the net.
Haverhill again hit the face of the post, this time substitute Marcus Hunt heading on to it from a Shinn set piece, Newson grabbing his second with a volley from the edge of the area through a packed penalty area on 75 minutes.
Hughes grabbed the final goal of the game in the 83rd minute, once again from the penalty spot but this time after Marcus Hunt had brought down Philip Boyland just inside the area.
ROVERS : Archer, Kicks, Spriggs, Shinn, Farrant, Holmes, Weaver (Swallow, 83), Baker, Alleyne, Moody (Sigler, 63), Longley (Hunt, 35). Subs not used – Newnes, Jebb.
Man of the match : Alex Archer.
More