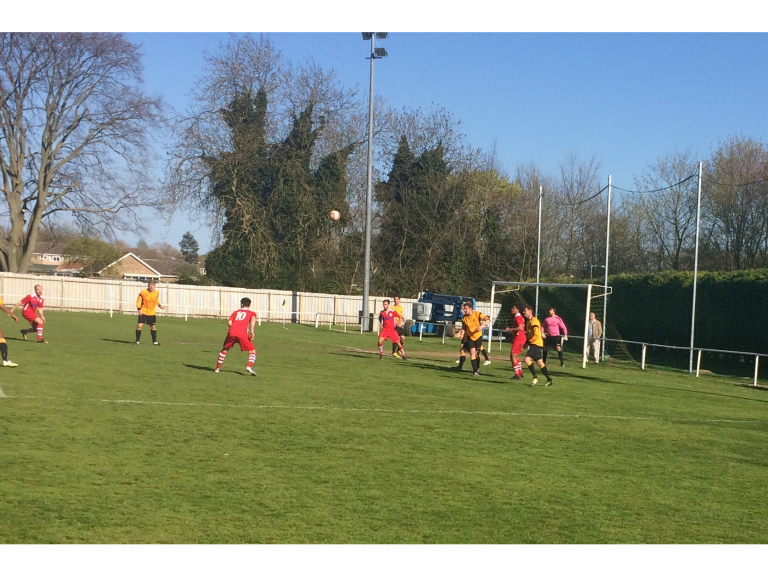 After a couple of decent home performances over the last 10 days Rovers faced a tricky trip to Mildenhall on Saturday as they continued their quest to pull clear of the relegation zone.

The game started in weather that would have been more at home to cricket as the bright sunshine reminded everyone the end of season was near and league tables were now being counted.

Rovers started brightly and played some neat football through the thirds as they tried to get at the home side and Perry Moody soon tried to open the scoring when he shot just over from the end of the box.

Mildenhall then took an early lead with their first real attack when Brown did well to cross from the left to find Matt Green who tucked the ball past Graham Smith in the Rovers goal with a neat finish.

Rovers did not let this affect their confidence as again they looked to play a good passing game through the midfield with player manager Shinn again, and not for the first time this season, pulling the strings and leading his team by example.  It was not long before his through ball found Ty Alleyne who powered pass the home defence before the teenager rounded keeper Pope to slot home for a well deserved equaliser.

Rovers continued to have the upper hand as Abbott and Murray both probed at the Mildenhall defence as they combined well to find Alleyne in box whose challenge with Pope caused a real goal scramble as the home defence went into panic mode.

Rovers went into the second half playing down the slope and again enjoyed some good possession but the home defence looked solid and Mildenhall then began to get on top with retaining the ball but also found the Rovers defence of Hunt, Wilderspin, Holmes and teenager Burr a real barrier to break as they offered solid protection for keeper Smith who was rarely tested.

The game began to stretch as both teams tired but Rovers began to play an effective counter attacking game as they got men behind the ball and attacked in numbers.  The day belonged to solid defences as neither keeper was really tested in the second half as the game finished all square and Rovers gained a well deserved away point that, with Whitton United beating Wivenhoe, ensured they were mathematically clear of the drop zone.

After the game Shinn said “I’m delighted with the hard work and honesty of the players as we secured our Premier Division status and we want finish the season well so the hard work will continue right through.  We have a superb changing room full of experienced and young Haverhill lads who want to build on this and do well for the club and town”.