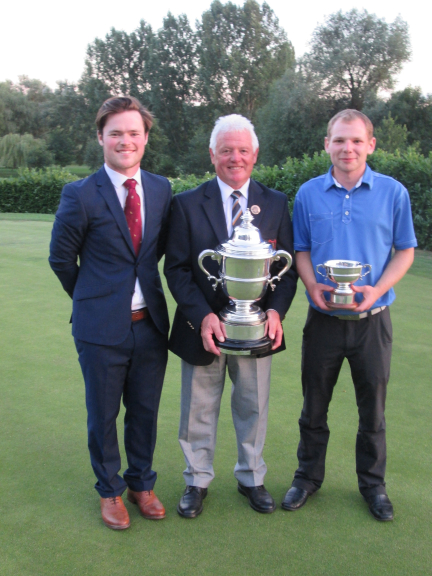 Haverhill hosted the County's blue riband event, the Suffolk Open on Sunday 9th August. A total of 60 golfers took part, representing 15 clubs throughout Suffolk. The field comprised of 11 PGA Professionals and 49 amateurs, including 7 Haverhill Members;  Chris Vince, Liam Merritt, Jack Bligh, Lewis Whiting, Matt Farlie, Russell Palmer and Andy Fish. They were set a tough challenge by Head Green Keeper, Glenn Norris and his team, who presented the course in superb condition. The speed of the greens surprised a lot of the competitors, who struggled at times with the pace, and throughout the two rounds, only one sub-par round of 68 was returned by  Chris Bartrum of Diss Golf Club. Following the morning round, three players were the leading the way, having each shot a gross 71; Patrick Spraggs, the Professional representing Woodbridge, and two amateurs, Robert Salter also of Woodbridge and Paul Waring of Felixstowe. The rest of the field were hot on their heels, so it made for an exciting afternoon round. Consistency paid off for the Woodbridge duo, both shooting a gross 71, to give a total of 142 and force a play-off to decide the Championship. It took 5 extra holes to reach a conclusion, following an epic demonstration of putting, with holes halved from nerve jangling distances to keep the match alive. Salter finally relinquished his challenge when he had to take a penalty drop on the par 4, 17th hole, having found the ditch, and he was unable to match the might of Spraggs who claimed the title Suffolk Open Champion for the third time, and his first as a Professional. There was however some consolation for Salter, as he won the Best Amateur prize with his score of 142.

There was success for Haverhill's Liam Merritt who triumphed in the nett competition with an overall score of  72-70=142 on count back and Haverhill's Matthew Farlie was the runner up with 75+77=142.

Afterwards Haverhill Club Captain Rob Viney thanked all the competitors for taking part and hoped they had enjoyed their day. He then handed over to SGU Official, Phillip Graham for the prize giving, who went onto commend Haverhill  Golf Club for hosting the event. He extended his thanks on behalf of the SGU to the Members for giving up their course for the day - it was greatly appreciated by all those who took part. SGU President Phil Platten thanked all the staff for their hospitality and gave special thanks to Glenn Norris and his team for providing 'the best greens in the County, if not the Eastern Region', which was high praise indeed. Next year's event will be held at Woodbridge, where Patrick Spraggs will be defending his title on home turf.

The Seniors Open was held at Haverhill on Thursday 6th August. An impressive field of 128 competitors took part, representing 39 clubs from across the UK, with one pair travelling from Ross on Wye, one from Scunthorpe and another from Perthshire, Scotland. The competition format was pairs better ball stableford, played off ¾ handicap. The scores were all extremely close with the places having to be decided on count back. Haverhill's Howard Wood & Paul Holloway from Ashby Decoy Golf Club in Scunthorpe just had the edge with an excellent score of 41pts to claim the victory. In 2nd place were Chris Day & Ken Stapleton from Harwich & Dovercourt with 40pts on count back, and in 3rd place were David Hedley & Roger Stroud from North Weald with 40pts. The Veterans prize went to Norman Beaton & Stan Purdy from Gog Magog with 39pts. Winning the front 9 were Allen Purvis & John o' Hannan from Girton with 21pts on count back and winning the back 9 were Richard Sharpe from Haverhill & A Cole from Play Golf Colchester with a score of 21pts. Afterwards Haverhill's Seniors Captain, Roger Corbett, gave the prize presentation and thanked everyone for contributing towards making the event a big success, including event organiser Brian Johnson and members of the Haverhill Senior Section for all their help and support.

On Wednesday 5th August Haverhill Ladies played in their Midweek Medal.  Some commendable scores were returned and the winner was Leah Letcher with 97-27-70. In 2nd place was Jackie Condon with 82-11-71 and in 3rd place Linda Alexander with 94-20-74. In the Saturday Medal, Mandy Williamson  was the runaway winner, 9 shots clear of her nearest rival, with a fabulous 88-24-64, slashing her handicap by 4 shots to 20. The  runner up was Anne Reed with 104-31-73 on count back and in 3rd place Gerrie Wheatley with 93-20-73.

Neville Felton, a longstanding member of Haverhill Golf Club and lifelong fan of Ipswich Town Football Club had the day of his life when his football hero, Mick Mills, came to visit Haverhill Golf Club. Head PGA Professional, Paul Wilby, who knows Mick from his time working at Fynn Valley Golf Club in Ipswich, organised the game on Tuesday 28th July, which was a return match having played at Mick's home club at Hintlesham last year. Neville teamed up with his hero for both matches and having beaten Wilby and his partner, also called Neville, at Hintlesham managed a draw at Haverhill to lead the ongoing series by a point. After the game Mick shared some of his football stories and answered questions from Neville about the players and European matches against the mighty Real Madrid and Barcelona, who both lost to Ipswich when Neville was there, supporting in the stands at Portman Road. Mick presented Neville with a plaque to mark this occasion which now has pride of place in the Pro Shop, positioned on an 'ITFC blue wall'. Wilby said 'I am thrilled to have organised these days for Nev as he is such a huge fan of ITFC and Mick Mills. We are already looking forward to this season and next year's visit to Hintlesham Golf Club.