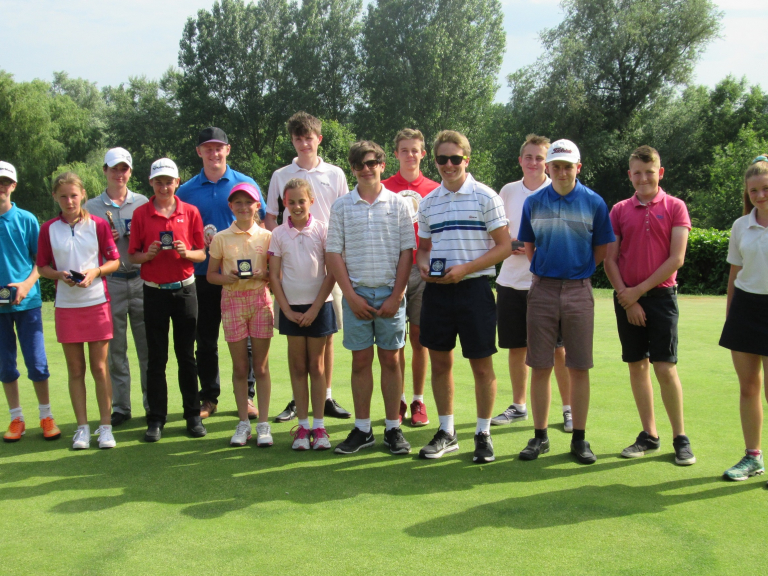 Haverhill Seniors contested the Alfa Romeo Shield on Tuesday 30th June. The event format was men versus ladies, individual match play over 10 holes. The result was a friendly draw, however as the men won the competition last year, they retained the trophy.

Haverhill played in the last league match of the season in the Curry Cup at home against The Essex on Saturday 4th July. It was an incredibly tight match and the overall result was a draw 9-9. Haverhill now have to wait until all the league scores are in to see whether they have done enough to qualify through to the semi finals, with a score of 37pts. The result of the morning foursomes matches were (Haverhill Team first): Paul Bartlett & Andy Fish won 5&3 vs John Booth & Simon Babbs, John Young & James Hastie lost 1 down vs Laurence Park & Jamie Messenger, Gerry Scott & Bob Spittle lost 3&1 vs Ed Oldaker, Mark Barrett & Terry Lyons lost 3&2 vs Andreas Ganno & Paul Wolton, Gary Cowley & John Kennedy won 6&5 vs Ron Shires & John O'Neill and Glen Hughes & Fraser Curl won 3&2 vs Niall Garner & Chris Soke. In the afternoon singles John Young lost 3&2 vs Laurence Park, James Hastie lost 1 down vs John Booth, Andy Fish finished all square vs Ed Oldaker, Paul Bartlett won 1 up vs Karl Bowden, Bob Spittle finished all square vs Simon Babbs, Gerry Scott won 4&2 vs Jamie Messenger, Fraser Curl lost 3&2 vs Andreas Granno, Terry Lyons won 3&2 vs John O'Neill, John Kennedy lost 5&4 vs Niall Garner, Glen Hughes lost 2 down vs Paul Wolton, Gary Cowley won 2 up vs Ron Shires and Mark Barrett won 3&2 vs Chris Soke.

Club Captain Rob Viney hosted his Captain's Day on Sunday 5th July. The event was open to all sections of the golf club and the format varied with holes 1-6 played as greensomes, holes 7-12 as foursomes and holes 13-18 as individual stableford, with both scores to count. An impressive field of 108 took part, despite falling on the same day as the British Grand Prix. The winners were Mark Wray and Kevin Snow with 62pts. In 2nd place were Roger Turner and Scott Turner with 55pts and in 3rd place were Jamie Morse and Steve Brooks with 54pts. Nearest the pin for men on 16th was won by Ivan Drury and nearest the pin in 2 on the 18th was won by Mary Sail. Special prizes were awarded to the highest score by a husband/wife pairing which was won by Chris and John Grainger, the best score for the pair including a junior was won by Dan and Carl Walker and the best score for the team with two ladies was won by Linda Alexander and Mary Sail. Rob Viney gave the prize presentation and went onto thank all the volunteers who assisted him on the day and he announced that  £208 was raised for his Charity through selling 'Mulligans' (to retake golf shots!), and the proceeds will go to the National Autistic Society.