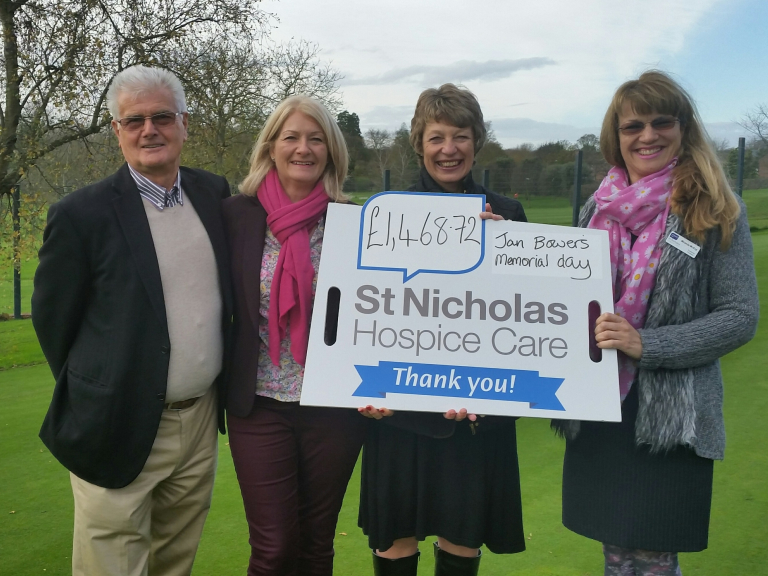 On Friday 20th November, Miranda McCoy,  a representative from St Nicholas Hospice Care, was invited to Haverhill Golf Club to be presented with a cheque for £1,468.72. The funds were raised at the Jan Bowers Memorial Golf Day, held in October. The event was organised by Peter Bowers, a Past Captain of Haverhill Golf Club in 2007, and was held in memory of his wife Jan, also a member at the Golf Club who sadly passed away in 2014. The format of the golf competition was a Texas Scramble, with teams of 4, played off 1/10th of the combined handicaps. The winners were John Kennedy, Joe Davis, Ann Thompson and Doug Renyard with a score of 52.4. In 2nd place were Bob Spittle, Neil Franklin, Mary Sail and Jack Warwick with a score of 54.1 on count back and in 3rd place Andy Fish, Dale Mizon, Lyn Fish and Vaughan Mizon with a score of 54.1. The memorial fundraiser will be run on an annual basis from now on and Miranda thanked Peter and members of Haverhill Golf Club, on behalf of St Nicholas Hospice Care, for their generous and continued support.

The next meeting of the Suffolk Winter Alliance was held at Southwold on Thursday 19th November. It was a day that had wind and rain for at least half of the players' rounds. A field of 52 took part, including 4 Professionals competed on the Southwold course, with greens that were true and reasonably paced for the time of year. The Professional prize was won by Sam Forgan of Stowmarket with a three under par 67. In 2nd place was Rob Pritchard of Cretingham with 74 and in 3rd place was Phil Westley of Hintlesham with 77. The Four Ball Better Ball Stableford was won by the Stowmarket pairing of Keith Rooney and Ady Barham with 44pts. In 2nd place was Max Hemson & Niall Caven  (Newton Green & Stoke-by-Nayland) with 42pts and in 3rd place  Alex Davey & Ken McCredie (Stowmarket) with 41pts. Haverhill's Andy Fish & Bob Spittle finished just out of the prizes with 40pts.