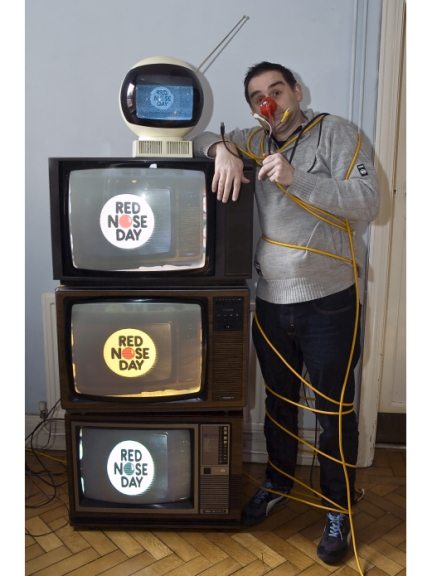 The team at Pure Energy TV and Film Props have been watching each episode of Let’s Dance for Comic Relief with a degree of pride having contributed to the retro style of this year’s decor.

The team, based in Haverhill, were delighted to help the charity by supplying, free of charge, a selection of vintage television sets.

Celebrating 25 years of Red Nose Day, the organisers of Comic Relief have introduced an eighties theme to this year’s event. And if you watch the final episode of Let’s Dance for Comic Relief on March 17, you might catch more than a glimpse the vintage televisions.

Many people will know Pure Energy as a web design and hosting company in Haverhill, but over the past 3 years the team have been developing a sub-division that specialises in supplying technical props for the TV & Film industry.

Pure Energy Managing Director, Jason Fitzpatrick said: “We were delighted to be asked to do our bit for this very worthwhile charity and we pulled together every working set we had available for the show.” Specialising in technology from the last forty years including TVs, radios, telephones, toys, games, mobile phones, calculators and computers, the company actually holds one of the best collection of vintage consumer electronics in the UK, and most of the items work!

In addition to this unique collection of props, the company’s rare combination of skills which include technical expertise, design experience and historical knowledge ensures they can solve most creative problems. Often asked to advise on the suitability and timeframe of props and even on occasion to provide a spokesperson to wax lyrical on camera, they describe themselves as ‘a bunch of geeks who loved and lived in the 60's, 70's, 80's and 90's and have hoarded everything they picked up along the way!’

Having pioneered the use of vintage TV equipment, Pure Energy TV and Film Props are particularly thrilled to see retro TV’s being used in such a high profile way and for such a good cause.

Jason Fitzpatrick sums it up: “We are all old enough to remember the equipment we used to view the live television extravaganza of the first Red Nose Day in 1988. It’s great to see those old TV’s appear again 25 years later. We love the challenge of making old and new technology interface in wonderful ways!” The website www.tvfilmprops.co.uk is a nostaglic trip through the past 40 years of technology in the home and at work, and is well worth a look …