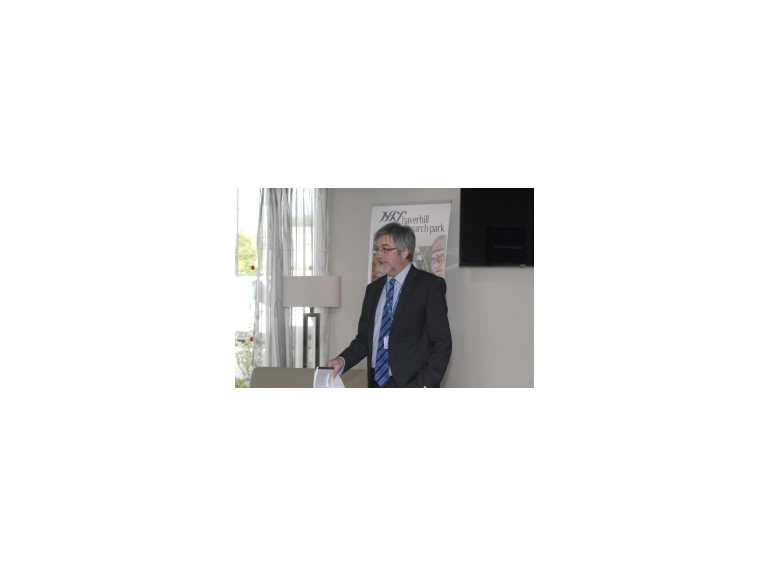 June McNaughton, a governor at Samuel Ward Academy and Principal Howard Lay were the guest speakers at the September meeting of the bestofhaverhill which took place at Days Inn Haverhill. They were invited to talk about the new special free school for Haverhill and how they pulled a successful bid together under a very tight timeframe.

June explained how a year ago a free school of any kind was not part of the long term plan for Samuel Ward Academy. They had just dealt with the successful but stressful integration of Years 7 and 8 into the school following the transition from a three tier to two tier education system in Suffolk.

Following discussions with another school about how they were planning to cater for children who had difficulties with language and interaction by opening a Special Free School June and Howard decided to explore the possibilities for Haverhill.

The team at Samuel Ward quickly moved from a position of not knowing very much about free schools to deciding just before Christmas to submit a bid for a Free Special School for Haverhill. Given that the success rate of the bids was small and the application process tough the bid team regarded this as a trial run, from which they would learn and then resubmit the following year.

Market research was undertaken to show the need for a special school did exist in Haverhill. Lisa Taylor, Communications Officer for Samuel Ward, was instrumental in gathering the evidence to support this area of the bid. Lisa worked with the primary schools and Castle Manor to establish that there would be enough parents in Haverhill and the surrounding villages willing to send their children to the school. Samuel Ward also hosted a highly successful consultation evening for parents and carers.

In addition to demonstrating there was a demand the team had to put together the proposed curriculum, demonstrate their competence and secure the support of the local authority to commission places at the new school.

Initially Suffolk County Council refused to support the bid as councillors feared the funding pot in Suffolk would be diluted however the Samuel Ward team continued with the bid regardless.

The deadline for submission was the end of February and the team worked under a great deal of pressure to follow the rigorous application process, which they should have ideally started work on the previous September. They had to produce a four year business plan detailing the financial strategy, their purpose and values.

The bid was submitted by the deadline and the team were surprised and delighted to be invited by the Department of Education for an interview. Samuel Ward Academy received the news in July that their bid had been successful; they had gone from no-hopers to winners!

The Churchill Free School will provide special needs education provision for up to 70 pupils from the age of 8-18. It will cater for young people with language and interaction problems, autism and high performing Aspergers Syndrome. The new school will be built on the grounds of Samuel Ward Academy and it is envisaged that many of the pupils will receive 80% of their lessons in mainstream education.

Howard Lay explains, “The Churchill Free School is a huge success for Haverhill. For years now the most vulnerable pupils in our community have been forced to travel as far as Ipswich to school. I believe this is an outrage and I am really pleased that as from September next year these pupils can be educated in their home town. This should make life a lot easier for the children, their parents and carers.”

The decision from Suffolk County Council on whether they will commission places at the Churchill Free School is imminent, the bid team are expecting a positive outcome.

Elaine Carr, owner of thebestofhaverhill comments, “June highlighted the main reasons for the successful bid. Pulling together a team of key people is critical not only to get the work completed but also to gain credibility. Samuel Ward worked with a local primary school, the Castle Manor Partnership and a Special School in Bury St Edmunds – they all channelled their expertise into the bid.

They gained the involvement and commitment of the stakeholders, in this case the parents of special needs children, which was crucial to demonstrate demand. Keeping sight of the big picture and not getting bogged down in the detail was another critical success factor.

Confidence, passion about what you are doing and never losing your enthusiasm even in the face of challenges are the traits that we need to win in business. This was another inspiring insight into the diverse range of talents that we have in Haverhill and provided some great lessons for businesses.”

If you would like to find out more about the Churchill Free School please contact Marian Merch-Chammon on 01440 761511.