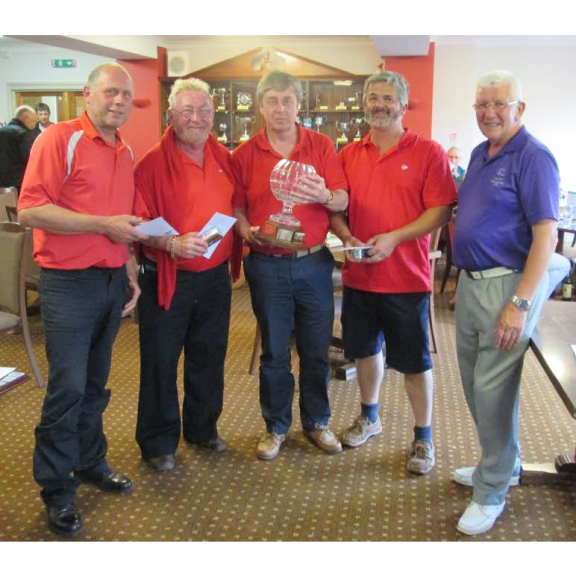 On Saturday 13th June, Haverhill Golf Club hosted a Charity Golf Day to raise funds for St Nicholas Hospice and the National Autistic Society. In all 23 teams took part in the team of 4 event, stableford format, played off 3/4 handicap with the best 2 scores from 4 to count. As part of the competition there was a Par 3 challenge on all the Par 3s, with prizes for a hole in one that included a brand new Vauxhall Corsa, a 3 day holiday for 2 people at the Praia d'El Rey Marriott Golf and Beach Resort in Portugal, a 2 night break for 4 people at the Marriott Forest of Arden and a set of TaylorMade golf clubs. Haverhill Member, Jake Warner, scooped the main prize when he scored a hole in one on the par 3, 202 yard 12th hole using a 3 wood, to claim a brand new Vauxhall Corsa, supplied by Drive Vauxhall of Haverhill. Past Seniors Captain, Keith McCallum witnessed Jake's spectacular tee shot which  landed on the green, rolled up to the hole and dropped in, much to Keith's delight and that of Jake, who once he realised, was cheering and jumping up and down on the tee with the rest of his team!!

Following the competition, Club Captain Rob Viney gave thanks to all the volunteers who assisted on the day, including Doreen Darbey, (registration), Jackie Adams and Stella Renyard (raffle), the starters on the 1st tee, Robert and Nevena Pyke, the Par 3 adjudicators, Geoff Dorkins, Keith McCallum, Lindsey Cornish, Karen Daniels and Chris & John Grainger, the long putt challenge, Mary Sail and Alan Carter (who also assisted with the scorecards), the halfway house volunteers, Rob's wife, Gerri Viney, Jenni Bradnam, Mandy Williamson and Doreen Felton. Rob then went onto thank the Green Keepers, lead by Glenn Norris for setting up the course to an excellent standard, and despite the damp and dreary weather conditions on the day, commented that everyone enjoyed their golf. Chef Jon Grimwood of Parklands Restaurant and the catering and bar staff were thanked for their wonderful hospitality and finally all the competitors were thanked for taking part, especially to the visiting teams who had travelled from Newmarket, North Weald and Saffron Walden to give their much appreciated support. The main event sponsors, Greene King, Saffron Insurance, Adams Harrison, HighTech Window Cleaning Ltd, Willow Business Centre and the various companies and individuals who sponsored holes were also thanked for their generosity.

Afterwards Haverhill Head Professional Paul Wilby held an auction of green fee vouchers, kindly donated by local golf Clubs, which raised £760 on the day. He then handed back to Rob Viney who gave the prize presentation. In the 'competition handicap' team event, 'The Grumpies', comprising Dave Cohen, Richard Newman, John Vale and Conor O'Brien, were the clear winners with a superb score of 94pts. In second place with 92pts were ‘Buildbase’ comprising Matt Farlie, Russell Gritty, Jake Warner and Neil Farlie and in 3rd place with 91pts were ‘The Last Stand’ comprising Trevor Broomfield, Roger Hartley, Richard Parker and Dave Smith. Winning the ‘non competition’ handicap team prize with 77pts were ‘Willow Mizons' comprising Peter Bowers, Dominic Bowers, Vaughan Mizon and Dale Mizon. Peter Bowers also won the first prize in the raffle, a 32” Panasonic Smart TV, which was donated by Chapman & Son, who have continued to support the Charity Day by supplying the main prizes for the past 12 years. The two Charities were also winners; overall £2,000 was raised for St Nicholas Hospice and the National Autistic Society.