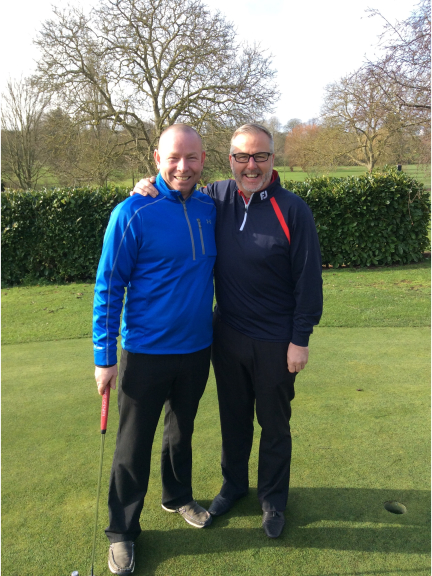 The Final of the 2015 Touchwood Cup, the winter pairs match play, was contested between Graham Ashcroft & Jason West and Dean Cornelius & Kim Ward. Graham Ashcroft reported 'It was a great match and we got off to a good start and went 1 up on the first hole. We halved the 2nd then won the 3rd to go 2 up. We halved the fourth with birdies then lost the 5th. We won the 6th to go 2 up, won the 7th with a birdie to go 3 up, halved the 8th and won the 9th to go 4 up . At this point we were only 1 over gross for 9 holes! We won the 10th and 11th to go 6 up and were still just 1 over par. Dean and Kim fought back and we lost the 12th, 13th, 14th to reduce our advantage to 3 up. Dean and Kim then made a great 5 on the 15th, with a 15 foot putt from Dean, however we holed the 5 foot putt for the par and win for a 4&3 victory'.

Fifty six players including two Professionals played at Southwold on Sunday 7th February. They braved the high winds to play on a course that was in good condition for the time of year.  The Professional Prize was won by the home Professional, Andrew Robinson, with a 73 and the runner up was Dean Fairweather (Bury Driving Range) with 81. The Four Ball Better Ball Competition was won by Terry Lyons (Haverhill) and Ian Wheeldon (Felixstowe Ferry) with 41 points. In 2nd place were Paul Bartlett & John Kennedy  (both from Haverhill) with 40pts and in 3rd place Andrew Robinson & Paul Booth (both from Southwold) with 38pts on count back.

Haverhill Ladies competed in their Rosebowl Final on Saturday 13th February. The field comprised all the monthly medal winners throughout the 2015 season. Despite the wintry conditions, Mandy Williamson battled through, continuing her recent form to claim overall victory with a superb round of 92-17-75. In 2nd place was Mary Sail with 96-19-77 and in 3rd place Anne Reed with 104-25-79.