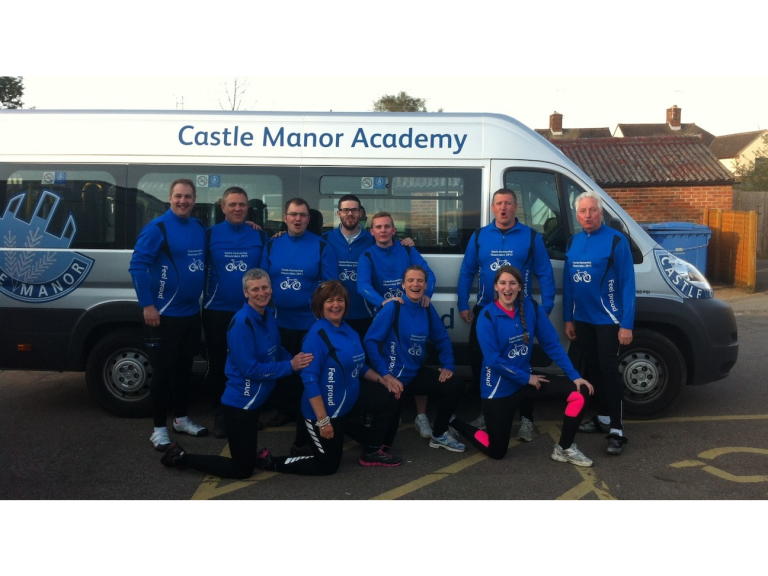 A group of eleven Staff and Directors from the Castle Partnership Academy Trust have completed the Moonriders London to Cambridge Challenge to raise fund for charity. The challenge was to cycle from Hackney Marsh, London, to Long Road, Cambridge… Overnight! The group was led to action by Andrew Barratt, Team Leader for PE, who pulled staff together to support the event. The Castle Partnership Moonriders, as they became known, were prompted by personal experiences to raise money for various charities that support causes close to their hearts.

Initially the group comprised of teachers and staff at the academy, but a chance conversation with a member of the Castle Partnership Academy Trust Board of Directors prompted two directors to become involved as well. The group gathered regularly to train, supporting and encouraging each other along the way. A small group of them also entered a 38 miles training ride to help hone their skills in March of this year.

On the night of the event the team met at the Academy for a carb-loaded meal to prepare them for the challenge, prepared by the Catering Teacher. They drove to London ahead of the 10pm start time to get themselves ready for the challenge ahead. They left Hackney Marsh around 10pm, winding their way through the busy streets of North London. The route became hilly as they left London and headed towards their first rest stop at Nazeing. From there they headed to Roydon and on to Little Haddam for a well earned hot meal. The route headed mostly downhill after this point for a sunrise rest at Great Chesterford, before heading off for a tour of Cambridge and eventually finish at 7:30am at Long Road Sixth Form.

The team have raised over £4,000 between them, which will be split between Breakthrough Breast Cancer, East Anglian Children’s Hospice, Macmillan Cancer and Prostate Cancer UK. They were supported in their preparation for the ride by Aerocycles and Chapmans with equipment and support and, former Castle Manor Student, Katie Ditchman with sports massage.

In addition to being a successful fundraising effort the challenge provided a fantastic opportunity for team members to pull together and learn more about one another. John Mayhew, Partnership Director, is relatively new to the partnership and commented on the experience “Preparing for the event was a strange mixture of dread and excitement, but it was a wonderful experience and I think our simultaneous passing through the Finishing Line was a fine example of team spirit. It was a great night for the Castle Partnership Academy Trust!”

Lisa Freds, Attendance Officer at Castle Manor Academy, was also full of excitement and pride for having completed the challenge “The Moon Ride experience was definitely a ‘landmark’ for me. The camaraderie of our team and the fact that other riders wanted to join us was amazing.”

Partnership Principal, Madeleine Vigar, had been following the event via twitter throughout the night and was there to welcome the team as they arrived back to Castle Manor Academy. “Watching their progress was fascinating and I could see in the pictures from along the route that everyone had put their all into the challenge! We’re all extremely proud of their efforts and raising over £4,000 is a fantastic achievement! The team were supported by many around them and we know they couldn’t have done it without them. Well done!”

The Moonriders are still accepting donations via their JustGiving page (http://www.justgiving.com/teams/CMAMoonriders) or at the Castle Manor Academy Reception on Eastern Avenue.

He lives in Haverhill,...