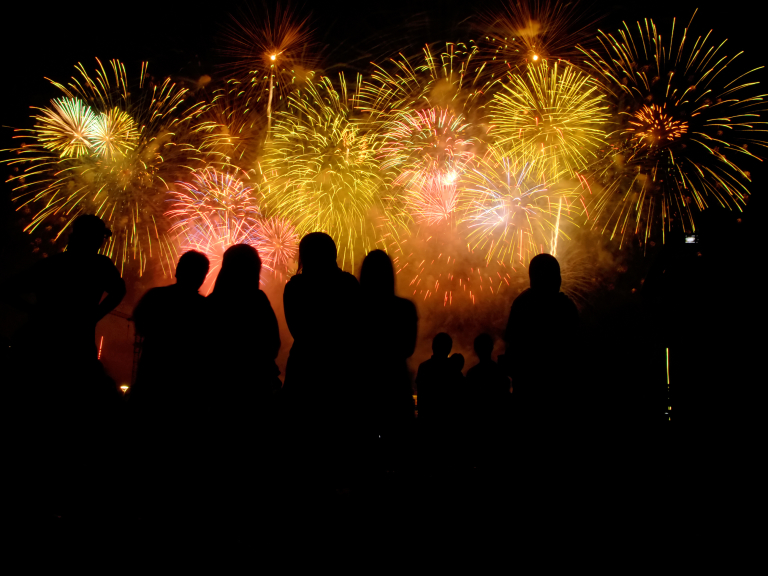 Here we are in the lull between summer holidays and Christmas festivities, wondering how to liven up a few of the dark nights ahead.

Bonfire night offers one such opportunity, and with the 5th November falling on a Wednesday this year, you can choose to celebrate early or late (or both!) as events are being held on the weekends either side of the 5th!

One of the things I love about Bonfire Night is that it is a custom that has changed very little over the years, with the same traditions passed down through the generations. Unlike many of our other festivals, it does not start months before the actual date, has not fallen victim to commercialisation (or at least I’ve never seen a Happy Bonfire Night card… thankfully) and actually commemorates a very specific event in British history.

And it’s funny, but don’t you get the distinct feeling that many people view Guy Fawkes with something akin to fondness?

Over the years have we not occasionally watched each political party ‘in action’ and think maybe Guy Fawkes had a point?!This is the man who conspired in 1605 to not just bring down Parliament, along with the ruling monarch King James I, but to blow it up! Guy Fawkes devised his ‘Gunpowder Plot’ in an effort to bring about an uprising of English Catholics already unhappy with the severe penal laws against the practice of their religion.

However, Guy Fawkes may have been a little over enthusiastic in his recruitment of co-conspirators, expanding their number to a point where secrecy became impossible. On the night of November 4th Guy Fawkes was arrested as he entered the cellar beneath the House of Lords, following the discovery of almost two tons of gunpowder concealed there.

Sadly, far from assisting British Catholics, the plot served to create further hostility towards them, and led to an increase in the harshness of laws against them. Even to this day, it is the law that no Roman Catholic may hold the office of monarch and the reigning king or queen remains Supreme Head of the Church of England.

On the very night of the thwarted Gunpowder Plot, it is said that the populace of London, knowing little more than that the King had been saved, celebrated by lighting fires and engaging in street festivities. Similar celebrations took place on each anniversary, with an effigy of Guy Fawkes burned atop the fire and hence over the years, became a tradition.

Although children are taught in school about the history of Bonfire Night, the celebrations are more about having fun and enjoying fabulous firework displays, wrapped up warm and enjoying scrummy hot dogs and the occasional toffee apple!

And that is what you can do right here in Haverhill and surrounding areas at these local events.

For those who can’t wait, on Friday 31st October from 5:00pm until 8:00pm, Haverhill Ex-Servicemen's Club are holding their own Halloween and Firework Big Bash!

Open to all and free of charge there will be a sweetie mountain raffle, a BBQ and carved pumpkin competition, as well as a fancy dress competition and goody bags for the children. The fun starts at 5.00pm with the fireworks at 7.00pm.

On Saturday 1st November from 6:00pm until 9:00pm Bury St Edmunds Round Table will be holding their annual Charity Fireworks Spectacular and Funfair in Abbey Gardens. This is their biggest annual event and their main source of funding so you are really supporting a good cause.

Reduced advanced tickets will be available from October in Tesco and Sainsbury's stores in Bury St Edmunds and also from The Apex Box Office.

Please click here to find out more about the Bonfire Night event being held near Haverhill.

If you can’t make it that weekend, or simply cannot get enough fireworks then why not head to Linton Fireworks Display.

Being held on Saturday 8th November between 6.00pm and 9.00pm in Linton village this display is now in its 25th year and alongside a spectacular firework display the whole family can enjoy a BBQ, drinks stalls and Guy competition, with all money raised from the display going to local schools.

Tickets cost £4 per person or £10 for a family ticket (2 adults and 3 children) and will be available from the village newsagents and online via Paypal. Prices will rise to £5/ £12 on the night.

More details on these displays can be found on our Events page, and if you or your organisation are holding a public display, simply let thebestof Haverhill know and we can add it free of charge.

Public firework displays have all but taken over from fireworks in the back garden, mostly due to safety concerns. If you are holding your own friends and family display, remember The Firework Code.

Young people should watch and enjoy fireworks at a safe distance and follow the safety rules for using sparklers. Only adults should deal with firework displays and the lighting of fireworks. They should also take care of the safe disposal of fireworks once they have been used.

1. Plan your firework display to make it safe and enjoyable.
2. Keep fireworks in a closed box and use them one at a time.
3. Read and follow the instructions on each firework using a torch if necessary.
4. Light the firework at arm's length with a taper and stand well back.
5. Keep naked flames, including cigarettes, away from fireworks.
6. Never return to a firework once it has been lit.
7. Don't put fireworks in pockets and never throw them.
8. Direct any rocket fireworks well away from spectators.
9. Never use paraffin or petrol on a bonfire.
10. Make sure that the fire is out and surroundings are made safe before leaving.