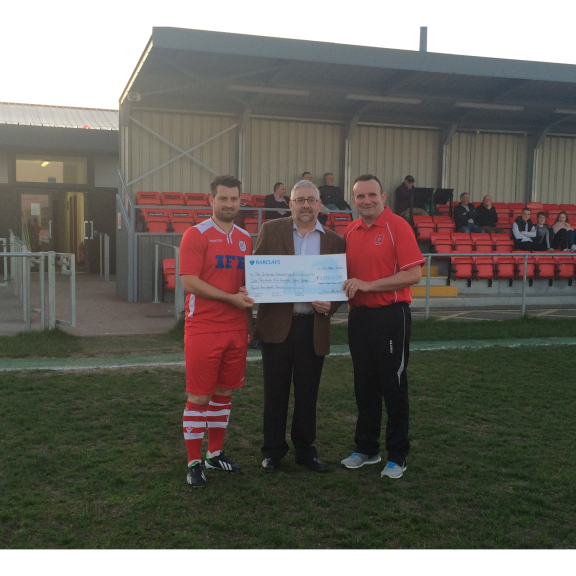 After a warm sunny day a dry bumpy end of season pitch greeted both teams for this Tuesday evening fixture at The New Croft.

Both teams still did well to play some decent football in the opening stages with Shinn marshalling the midfield well for Rovers as they left limited space for the visitors to play through resulting in long balls that were easily dealt with by Hunt and Farrant in the heart of the Rovers defence.

At the other end 17 year old Rovers striker Tyrone Alleyne gave the experienced Felixstowe defence a torrid time with his constant running and he nearly opened the scoring when he latched onto a Murray through ball and brought a good save out of Crump in the visitor’s goal.

Rovers were then dealt a blow when Farrant was badly injured after a collision in the visitor’s box that resulted in him having to be replaced by O'Brien with Wilderspin shuffling to centre back. Rovers continued to have the better of exchanges as Moody and Abbott both shot at goal before Felixstowe took the lead, against the run of play, when a good move between Burchfield and Cranfield saw the ball fall to Dew who scored with a neat finish giving Smith no chance in the Rovers goal and the visitors the half time lead.

Rovers started the second half bright and soon forced a corner that Hunt got on the end of resulting in another good save from Crump who tipped the ball over.

The visitors then played compact and looked to limit space which worked for best parts as the play was snuffed out in the midfield battle resulting in neither keeper being seriously tested.

With time running out the visitors seemed happy to slow the game down as they tried to sit on their slender lead but Rovers bought on some fresh legs and pace as Charlie Sigler was brought off the bench and was clearly instructed to make an impact.

The youngster duly responded when he picked up a Shinn forward pass on the edge of the box and cleverly turned Barber before slotting the ball past Crump to give his side a well-deserved point against a strong Felixstowe side.

Haverhill Rovers also presented a cheque to George Burroughs of The Stroke Association, East Division, of £1537.80 which was the total amount raised at the game in March v Thetford Town in honour of Nick Wray and they also invited all the Club’s sponsors from U6s through to Vets to the match as a very big thanks.