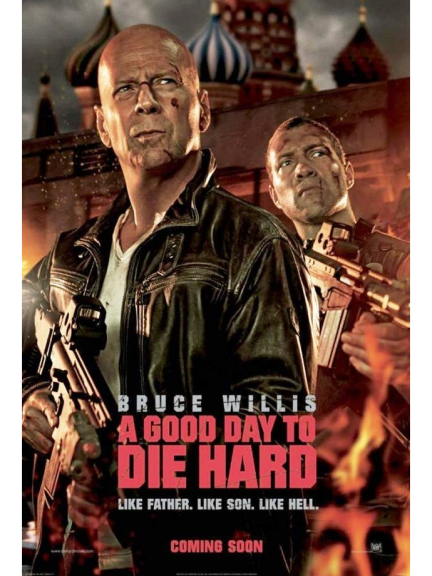 Bruce Willis is back as John McClane and yet again surrounded by trouble, being followed wherever he goes by a path of destruction and relentless bad guys.

This instalment of the long running franchise sees John in Russia seeking out his muscular adopted looking son, played by Aussie actor Jai Courtney. What should be a fun and sweet father/son action flick quickly turns sour as it’s weighed down by faceless Russian characters who fail to represent any kind of threat to our heroes at all.  There is a lack of chemistry between Willis and Courtney and far too much whining from Courtney about Bruce not being there when he was growing up.  By the time we reach the half hour mark we’re powerless but to cry “For the love of God be quiet, he was too busy being in the wrong place at the wrong time!”

The director’s chair this time out is filled by John Moore, the man behind the remake of The Omen and Max Payne, if that doesn’t get you excited then you’re a sane person.

A Good Day To Die Hard’s third act takes place in the radioactive ruins of Chernobyl, ironically reflecting the toxic touch of John Moore. The father/son whining and lack of coherent plot aside, this film has some pretty good action sequences and the opening chase scene stands out as potentially a franchise favourite but even a smirking Bruce Willis and a booming score by music maestro Marco Beltrami isn’t enough to stop the franchise from dying... hard. Here’s to hoping the sixth film plummets to its death Hans Gruber style.