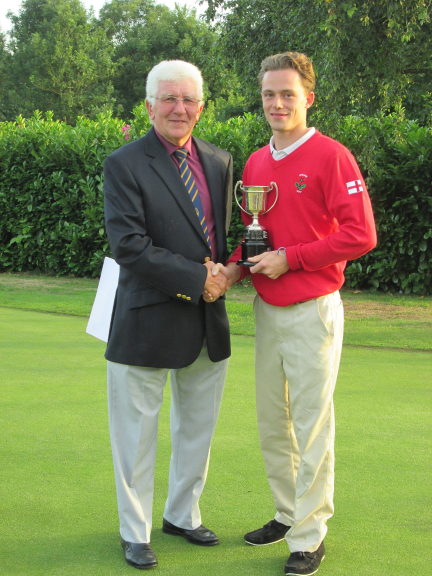 A field of 47 competitors took part in this year’s Club Championship at Haverhill Golf Club on Saturday 1st August. The format was medal, played off scratch over 36 holes with handicaps 0-16 eligible to win the F Johnson Cup and handicaps 10-18 eligible to win the Spencer Tatum Trophy. The course was set up to provide a tough test for those taking part, with some tricky pin positions. Liam Merritt and Charlie Hudson were leading the way after the morning round both carding an impressive gross score of 74, and in close pursuit were Chris Vince and David Spittle both with a gross 75. Consistency paid off for Chris Vince during his afternoon round, as he returned another gross 75 to claim the overall victory with 75+75=150 and become Haverhill's 2015 Club Champion. The runner up was David Spittle with 75+77=152 and in 3rd place was Andy Fish with 78+76=154 on count back. Colin Bradnam claimed the Spencer Tatum Trophy, with 88+80=168. Colin's handicap was reduced by 2 shots to 9 under the exceptional score reduction system , due to his second round score and previous low score in a club qualifier. In 2nd place was Peter McLennan with 87+83=170 and in 3rd place was Terry Lyons with 84+87=171. Club Captain, Rob Viney, announced the results afterwards and Past President, Spencer Tatum, presented his trophy to Colin Bradnam.

Haverhill Juniors competed in the Dave Quinney Trophy on Tuesday 28th July. The winner of the medal competition was Fiona Stokes (receiving 2 courtesy shots) with 85-16-69, in 2nd place was Tom Turner with 94-19-75 on count back and in 3rd place was James Iron with 87-12-75.

On Wednesday 29th July Haverhill Ladies competed in the Rainbow competition, a team stableford event played off alternate white, yellow and red tees, with the best 2 scores to count. Chris Grainger, Siobhan Harrison and Val Shipp were the winners with a combined score of 70 points. The runners up were Theresa Spittle, Pat Wellstead and Jenni Bradnam with 69pts. In 3rd place were Pat Kennedy, Marian Mercer and Carol Day with 61pts.