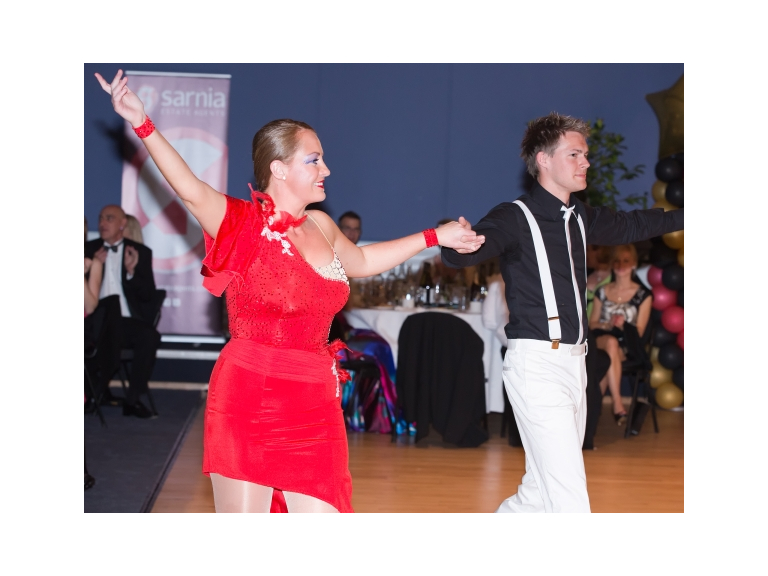 Last weekend saw the climax of several months of hard work for participants in the Sarnia Estates Dancefloor Challenge.

The event is always extremely well supported and has become a popular annual fixture in Guernsey.  In fact, this year the demand for tickets was so great, that the event was hosted over two nights for the first time, giving twice as many people the opportunity to see it.

I was lucky enough to take part this year as one of the 'amateur' dancers, and it was without doubt, one of the best experiences of my life.  Not only am I a stone lighter in weight but I have made some great new friends, faced and overcome some personal issues and gained a few new hobbies along the way!

For the Challenge I was paired up with Alex Rowe to learn the Argentine Tango for a group dance and the Ballroom Tango for our couples dance.

I was pretty nervous at our first rehearsal but everyone was so friendly and my dance partner Alex, who had just finished instructing a Zumba class, came over and gave me a big sweaty hug, which definitely broke the ice!

I have never done any ballroom dancing before so was concerned whether I would be able to pick it up and how Alex and I would get on.  However, Alex was very patient and after picking up the basic steps reasonably well, he helped me work through those I didn't find so easy.  It is quite strange being in close contact with someone you've only just met, but Alex was always encouraging and reassuring which helped me to feel more at ease and relaxed.

Learning the Argentine Tango was a lot harder and I had real issues with Alex having to take my weight.  I had suspected I'd feel this way but was hoping to be proved wrong.  To begin with, I struggled to even lean on Alex let alone allow him to pick me up!  But after working on some trust exercises and slowly building my confidence over several weeks, Alex's patience helped me overcome these problems.

To help increase core strength and fitness and lose weight to build confidence, I also attended Pilates classes with Juliet Higgs at the Core Wellness Centre and Zumba classes with LeT's Dance.  Both of which I'm looking foward to continuing with.

As the Challenge drew nearer the group all got to know each other better and were incredibly supportive - giving praise to one another or encouragement when needed.

On the first night the changing rooms were a flurry of excitement; fake tans had been applied, outfits had arrived and backstage was a mass of nerves, glitter, make up and sparkles.  It seemed like forever waiting to be presented to the audience but then the rest of the evening flashed by.

All the competitors did extremely well with a wonderfully receptive Guernsey audience. Scott Carre from Oracle Finance and Celena Tabel were crowned winners that first night, with Dale Crowsley from Forest Road Garage and Bonnie Lehr in second place and Laura Clayton from Island FM and Jonathan Garritt third.

On Saturday everyone was a little more relaxed and able to enjoy the evening more. It was a larger audience and we knew this was our last opportunity to perform the dances we had worked so hard to learn.  Everyone pulled out all the stops and overall scored higher than the night before.  Alex and I even got three 9's and a 10 for our couples dance which made all the work over the past months worthwhile.  The judges votes were added to the audience votes and Natalie Giles from Vets4Pets and Jamie Le Tissier placed first, Scott Carre and Celena Tabel second and Laura Clayton and Jonathan Garritt third.

The overall Sarnia Estates Dancefloor Challenge winners were then announced and Alex Ford from Sarnia Estate Agents presented Scott Carre and Celena  Tabel with their trophies.  Scott was delighted and overwhelmed with his win;

"At the start of the experience I thought I had two left feet so I was beyond pleased that Celena and I won".  Scott Carre

Celena was also delighted to win, having taken part in the Dancefloor Challenge for the last six years, and placing second three times.

An extraordinary amount of hard work went into the event - not only from the organisers and those taking part, but also the many individuals who volunteered their services, including Grace and Lisa from Chique Beauty, Hair & Nails who made everyone look fabulous.  The whole weekend was a great success enjoyed by everyone who took part and attended, but most importantly raised lots of money for Guernsey charities.

Personally I have had great fun throughout the whole experience and would like to especially thank Alex for putting up with me and being a patient, supportive dance partner! Plus I have received so much encouragement from family and friends to KEEP DANCING that I have decided to continue to learn ballroom dancing.

Would I do it all again?  Definitely!

Photographs Below by Alan Bull of Digitaphotopost

How carbon intensive are electric vehicles?

WIN a Northern Delights Experience afternoon tea for four people
Sign up for offers
Sign up for what's on guide
Become an author
Popular Categories
By clicking 'ACCEPT', you agree to the storing of cookies on your device to enhance site navigation, analyse site usage, and assist in our marketing efforts.
For more information on how we use cookies, please see our Cookie Policy.