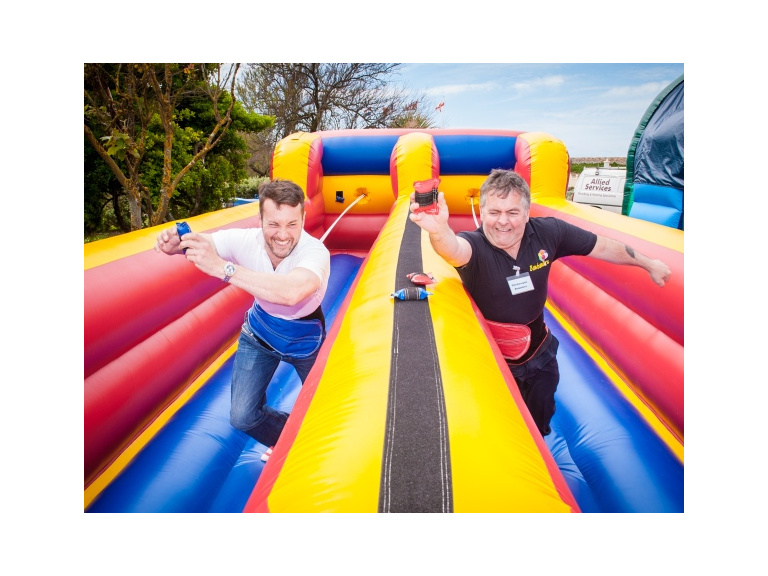 Last Friday, The Best of Guernsey held a social business networking event at Guernsey Golf School and La Grande Mare Hotel.  This event was slightly different to our usual in that it was held over a lunchtime rather than in the evening and was more interactive and competitive with outdoor based activities.

An introduction and short networking game followed a welcome drink and burger in the hotel's Club Room. Attendees were then split into three groups taking their turns to do three activities.  One of which was a tour of La Grande Mare Hotel and Health Suite.

The other two activities were competition based.

Fristly Phil Sykes of Guernsey Golf School fast tracked us all with a 20 minute golf lesson which would normally take hours.  Two targets were marked out with points being gained for any balls landing within them.

Secondly each person was offered a go on Pete's Castles Bungee Run to see how far they could place the sticky velcro pouch.  This really brought out the competitive side of everyone and was definitely enjoyed by those who took part. There was also a bouncy castle for those wanting a more relaxing bounce!

Guernsey Golf School gave a prize of free golf tuition for the pair gaining the most points which Richard Hardie from Livingroom and Ian Bashforth of McCathie Associates won.

And a bottle of pink fizz was awarded to the champion of the bungee run which Tim Holmes from Holmes Architects won.  Not only did he get the furthest out of all the attendees, using a unique style, but reached the furthest anyone has on the Bungee Run to date!

Certificates were also presented to business members who had received 10+ testimonials since the last networking event in January.  Available to receive their certificates at the event were Debbie Duport of Debbie Duport Dancing, Chris Blin of Accent Multilingual Services and Personnel Appointments, Nick Windsor and Mark Adnitt of Hot Source, Phil Sykes of JamGolf.com and Gerald Henshaw and Ron Herve from Guernsey Electronic Organ Society.

At each networking event The Best of Guernsey chooses one local charity to support and receive donations from its guests.  This event supported Young People Guernsey (YPG) and raised £104 for this worthy cause;

"Thank you to the lovely people at The Best of Guernsey for donating the charitable proceeds from their corporate lunch last week.  Every penny counts so thank you so much for thinking of us".  Simon Torode - YPG Committee Member

If your company is holding an event soon that could help support Young People Guernsey, please get in touch with simont@livingroom.gg as this community driven charity needs you!

It was a great afternoon enabling some of our business members to network in a relaxed environment and proved that business networking REALLY can be fun!