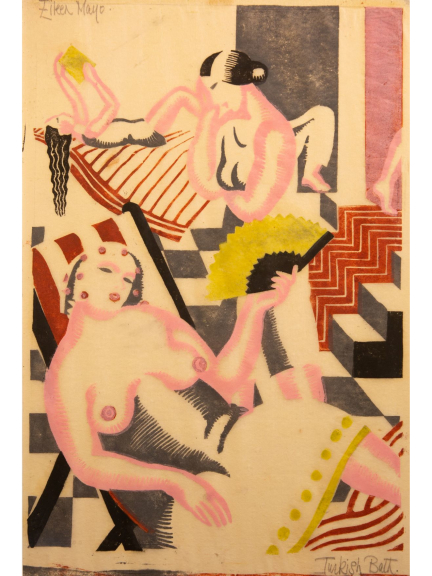 The work of multi-skilled painter, printmaker, illustrator, and tapestry designer, Eileen Mayo (1906-1994) will be celebrated in a solo exhibition; her first in the UK.

Despite her exceptional skills, Mayo remains largely unknown in the United Kingdom. She was made a Dame Commander of the British Empire just before she died in 1994, but her work is far more widely celebrated, exhibited and collected in New Zealand, where she had relocated in 1962 (following ten years in Australia), and where she spent the remainder of her life.

Mayo’s long career was characterised by her crossover between fine and applied arts and associations and also time as an artist’s model. Having attended the Slade and then the Central School of Art, Mayo’s early career saw her working as a model to some of the best-known artists of the time, including Laura Knight and Dod Procter. Learning from these artists she pushed her own work, showing her first prints at the Royal Academy in 1930. Mayo had shown an early love of nature and understanding of natural history and this was demonstrated through her work for the rest of her career. Her rare ability to combine this knowledge and understanding of nature with a skill at representing it across a wide range of media - including illustration, books, prints, paintings, tapestries, murals, posters, stamps and coins, as well as through her own writing, will be showcased to the public through this exhibition.