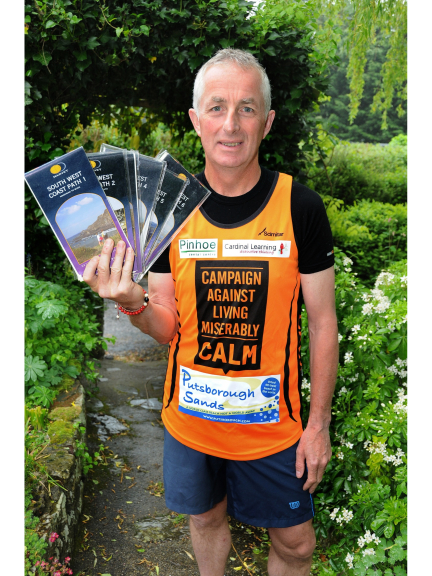 Mark Berry, from Bishops Tawton will begin the challenge next week on Sunday 17th May from South Haven Point in Poole – he is aiming to be back in Minehead by 29th May.

The current world record stands at 14 days, 6 hours, but Bishops Tawton based Mark Berry believes he can break this record after competing in several long distance races across the world.

Social Worker Mark, 53, said: “Although I’ve only been running for a few years, I’ve already taken part in some of the most gruelling races around the world, including the 104-mile Ultra Trail Monte Blanc around the French, Italian and Swiss Alps.

“I’ve been bitten by the bug of ‘ultra-running’ and decided that running the South West Coast Path should be my next challenge.

“I’ve chosen to raise money for the charity CALM (Campaign Against Living Miserably), which exists to prevent male suicide in the UK: I love the service they provide and what they aim to achieve.

“Having suffered from depression in the past myself, I am aware of the acute need to raise awareness and support for people who suffer from mental ill health. I hope my challenge helps to raise both funds and the profile of the charity across the South West.”

“What makes it particularly poignant for me is after walking the South West Coast Path I lost count of the number of memorial plaques dotted along the path remembering young people who died. It shows that the coast is an important place for a lot of people, whilst also being a stark reminder of how fragile people's mental health is and what a tragedy it is if it results in a life cut short.

Mark only began running in January 2012, just after turning 50 and he discovered he really enjoyed it, particularly hill running.

Mark aims to run for between 12 and 14 hours a day and has been training by running up to 120 miles a week.