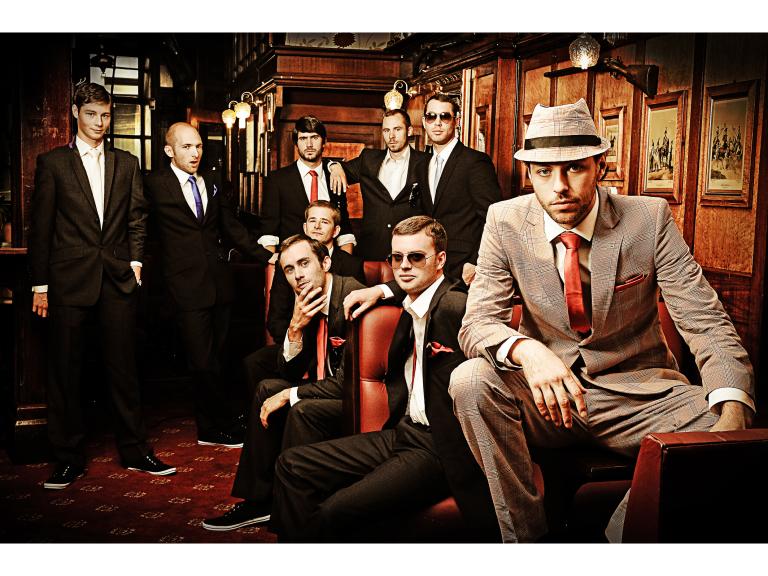 'The Factory' Petroc and Boom Artists Agency are proud to present...Gentleman's Dub Club with support from Shire Roots & Blazenstein, KSH and the Going Goods, JDotBurn and Danzie. Celebrating the release of their brand new LP, FourtyFour, Reggae Dub heavyweights GDC bring the fire to The Factory.

Gentleman's Dub Club is a nine-piece band that formed in Leeds in early 2006. With a style based in dub, ska and roots reggae. GDC have burst onto the UK circuit rocking gigs and festivals up and down the country with their super high energy show. Combining tight grooves and a heavyweight sound Gentleman's Dub Club bring the party to crowds of all ages hungry for a dance floor workout, with their gigs often ending in a frenzied mosh pit reminiscent of a mid-80's ska night!

Live effects and mixing make for a crystal clear sound, and the band's larger than life stage presence makes for a mesmerizing experience.

Shire Roots & Blazenstein (Irie Bingo) Home-grown sound system vibes outta Devon playing everything from tuff digital dancehall to new heavyweight roots & culture.  Irie Bingo hold firm to the roots of reggae music as a rebel music and so come to spread a conscious vibe and uplifting messages and unity each and every time.

Their shows usually include original material from producer Blazenstein with Shire Roots chatting reggae and hip hop lyrics in a positive fashion, Irie Bingo are privileged to have worked alongside some of the UK's leading reggae artists including YT, Solo Banton, Deadly Hunta and Mungo's Hifi.

JDotBurn (Defcon)comes hard with conscious bars, double time flows and an all-round wickedman styleee on some classic and some new hip-hop riddims.  Expect to hear exclusive tracks from forthcoming EP 'Spark it Up' due for release Defcon records spring/summer this year.

JDotBurn has been working alongside the likes of Deadly Hunta, Shireroots and Skitz. He is set to play a few festivals this year such as Sunrise. According to KSH and the Going Goods the world of hip hop is a desolate one. With gangsters, players, pimps and g-thangs dominating the scene, the beauty of the genre is being lost.

Expect an alternative acoustic band from across the country, coming straight out of the 'ghettos' of Cheltenham with some Devon roots mixed in. KSH and the Going Goods is a five man troupe consisting of string-men Jack Carroll and Hassan Otsmane-Elhaou, vocalists Mikey Doherty and Kishi Allebone, rounded off with a unique drum machine, Beatboxer Kush Cushion.

Danzie (Selecta Vibe) the real believer in playing strictly vinyl will be selecting some classic dancehall and roots reggae!

MINIMUM AGE RECOMMENDATION: All ages. Under 16's must be accompanied by an adult.

For more information check out the website at http://www.ents24.com/barnstaple-events/the-factory-petroc