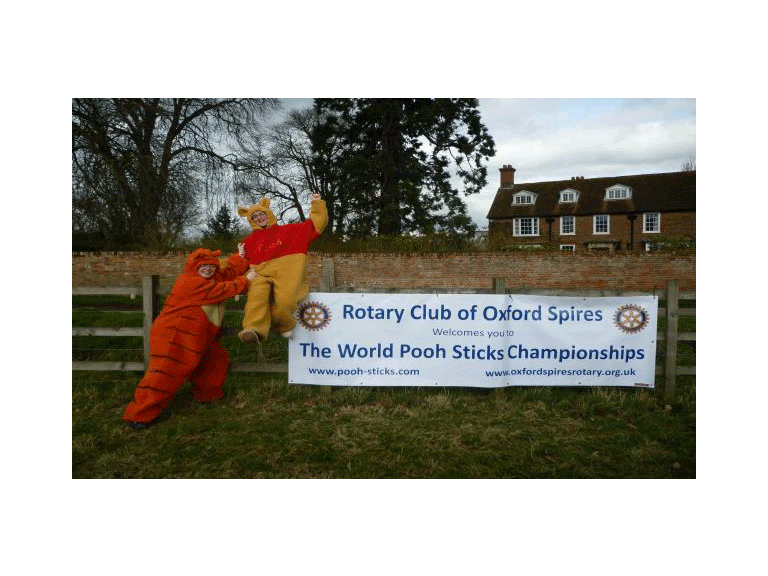 As Winnie the Pooh fans will know, Pooh and his friends enjoyed a game of Pooh Sticks on the river as described in AA Milne’s much loved books.

The World Pooh Sticks Championships started when the Lock Keeper noticed walkers recreating Pooh’s pastime on the River Thames and hit on the idea that this would be an excellent way of raising money for his favourite charity, the Royal National Lifeboat Institution.

The event soon took off and following the Lock Keeper’s retirement, the Rotary Club of Sinodun took over the running of the event for many years, until the event’s 25th anniversary in 2008. They then passed the baton (or Pooh Stick!) on to the Rotary Club of Oxford Spires in 2009 which is proud to carry on this wonderful event.

The World Pooh Sticks Championships have become so well known across the world that it has been known to attract up to 1,500 people and enjoys local, national and worldwide television coverage in more recent years.

The fame of Pooh Sticks is such that it has even been the subject of University Challenge and Mastermind questions and featured in films and television programmes (‘To The Manor Born’). It is often featured in order to demonstrate unusual and quirky English traditions. In fact, readers of Countryfile Magazine voted The Pooh Sticks Championships as Britain’s Favourite Quirky Event, 2012.

Members of Little Wittenham village will provide teas and cakes outside the parish church of St Peters, WSD Rotary Club will be firing up the BBQ and we will have plenty of other activities as well as the main event of Pooh Sticks on both bridges across the Thames.

As the Championships fall on Mothering Sunday this year, the organisers will be presenting a prize to the ‘Best Fancy Dressed Mum’ so are encouraging children to get involved in dressing up their Mums for the day.

Details of the 2014 event and link to the website can be found here.