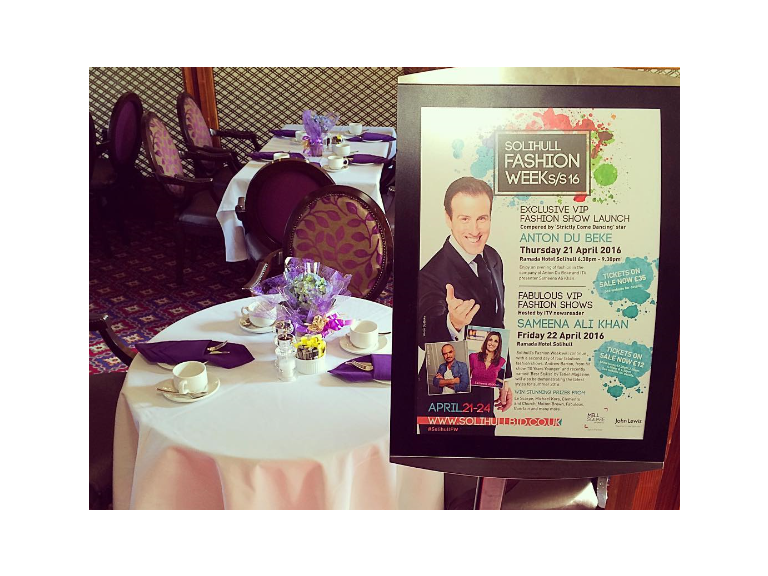 The hottest trends, the coolest looks, the must have styles; Fashion Week is coming to Solihull. The four day event will showcase the outstanding fashion offer in Solihull.

The two main sponsors have now been confirmed for the town centre's first ever Fashion Week.

Mell Square is partner for Solihull Fashion Week, while John Lewis has been confirmed as the sponsor for the Fashion Show catwalk at the Ramada Hotel.

Solihull Fashion Week, launches on Thursday April 21st. There will be four days of events taking place across the whole of Solihull Town centre with a stunning Style Arena in Mell Square and catwalk displays in Touchwood featuring high street looks and latest trends from independants.

The first ever Fashion Week has been organised by Solihull Business Improvement District and will bring thousands of extra visitors to the town centre, each keen to catch up with the latest looks.

The weeks events start with an exclusive VIP Fashion Show launch at The Ramada Hotel, Solihull with a chance to meet and mingle with fellow fashionistas. For one night only on Thursday 21st April, Anton Du Beke will be leading the glitzy evening compering the VIP Fashion Show. During the Fashion Show you will have the chance to put questions to the star himself in a Q & A session hosted by ITV Central newsreader, Sameena Ali-Khan.

Post Fashion Show Anton and Sameena will meet and mingle for one hour where Anton will be happy to sign photos etc. From independant boutiques to renowned department stores, Solihull's VIP Fashion Show will be showcasing the fashion elites.

Tickets for the VIP show cost £35 per head and include a drink, canapès and the Fashion Week Style Edit promotion booklet.

Solihull’s Fashion week will continue with a second day of four shows on Friday 22nd April. The fashion show times are 12.30pm, 2.30pm, 4.30pm and 6.30pm. Tickets for each show cost £12 per head and include a drink, canapès and the Fashion Week Style Edit promotion booklet.

Friday 22nd April will also include a hair tutorial from hairdressing royalty Andrew Barton as part of another day of glitz, glamour and must have looks.

Andrew Barton, who appeared on TV show 10 Years Younger, is one of the country's most celebrated hairdressing names and a stylist to the stars with celebrities booking months in advance to visit his salon.

Voted London's Best Hairdresser by tatler, Andrew will be appearing at the Solihull Fashion Week Catwalk Extravaganza at the Ramada Hotel for all the four shows on Friday April 22nd. He will also be giving a short tutorial on how to dress your hair for summer before a short Q & A interview with runway host, ITV Central newsreader Sameena Ali-khan, about hair dilemmas.

On Saturday 23rd April Touchwood is staging a dedicated men's fashion event running throughout the day in the Atrium. Don't miss out on all the new seasons trends and must have styling ideas that will feature on the runway at 11am.

Then on Sunday 24th April, it's the kids turn to strut their stuff on the runway, featuring the latest looks from River Island, Gap, Next, Zara and many more.

Make sure you come and join in this fantastic week and see the new Spring Summer season at Touchwood.

To buy Solihull Fashion Week tickets and for the latest announcements visit  www.solihullbid.co.uk