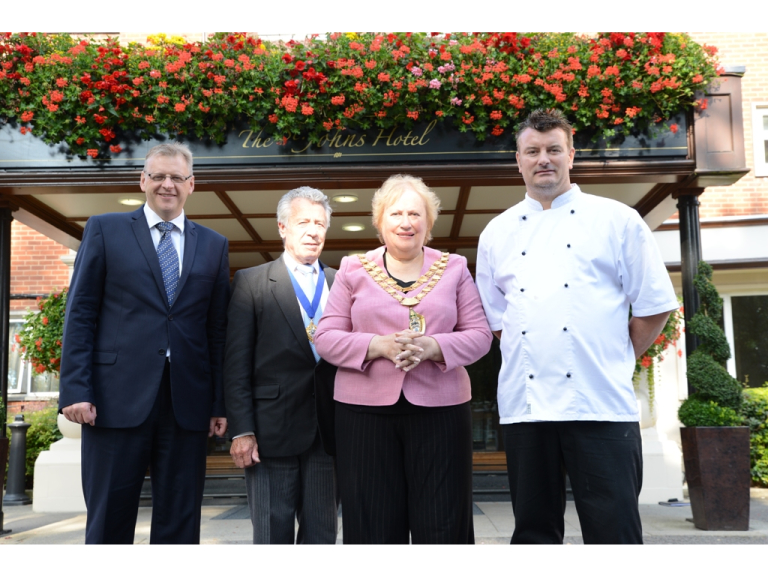 The Mayor of Solihull, Councillor Mrs Kate Wild, has helped to choose the menu for the annual Mayor’s Charity Ball, after The St Johns Hotel hosted a menu tasting session.

The Mayor and the organising committee were the VIP guests of the four-star hotel on Warwick Road so that she could select the dishes that will be served at the event, which takes place in April next year.

An array of dishes was prepared by the hotel’s executive head chef Darren Long as part of the detailed preparations for the dinner-dance – one of the highlights of the mayoral calendar.

Guests at the glittering occasion, which takes place on Saturday, April 25, 2015, will enjoy a bespoke three-course menu created by The St Johns Hotel chefs, as well as top-class entertainment. And as a major fundraiser for charities, including Macmillan Cancer Support, they will also have the chance to win some fabulous raffle prizes, including an overnight stay at St John’s Hotel with dinner and breakfast.

Darren McGhee, General Manager of the hotel, which last hosted the Ball in 2013, said: “The Mayor’s Charity Ball was a fantastic occasion when it was here and we are very much looking forward to welcoming the Mayor and her guests next April.

“We are already making preparations and were keen to get the menu details right at an early stage, so we invited the Mayor and the organising committee to be our guests at a menu tasting session.

“Our executive head chef did such a good job that it took longer than expected to choose the dishes for the three courses but we can say that guests are in for a real culinary treat.”

The Mayor added: “The Ball hopes to raise much needed funds for Macmillan Cancer Support.  It is set to be a wonderful evening, thanks to the help of the chefs at The St Johns Hotel who have put together a three-course culinary feast. I look forward to sharing the evening with many, many people from across the borough.”