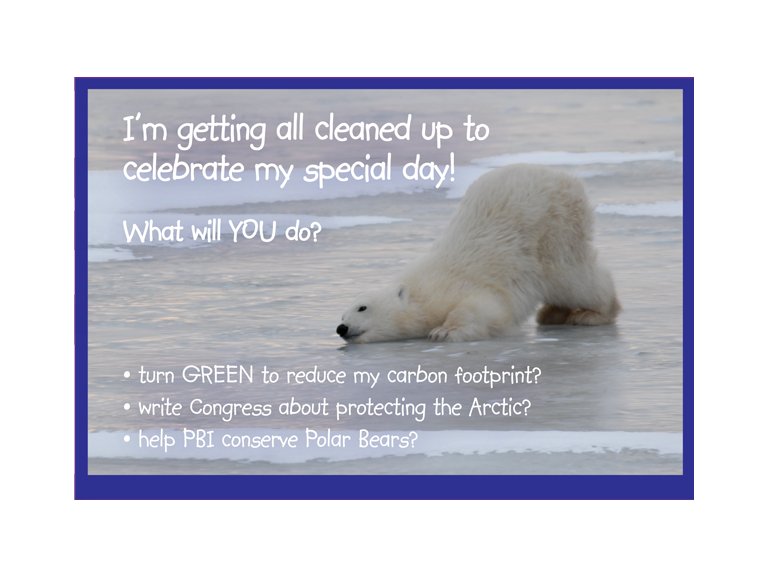 International Polar Bear Day is organized by Polar Bear International is to raise awareness about the impact of global warming and reduced sea ice on polar bear populations.

Polar Bear Day celebrates one of natures most impressive hunters, and the World's largest carnivore. A fully grown polar bear can grow to 9 feet (2.7m) in height.

Churchill  is a town in northern Manitoba, Canada on the west shore of Hudson Bay, roughly 110 kilometres from the Manitoba/Nunavut border. It is most famous for the many polar bears that move toward the shore from inland in the autumn, leading to the nickname "Polar Bear Capital of the World" that has helped its growing tourism industry.

Global warming and climate change are terms for the observed century-scale rise in the average temperature of the Earth's climate system and its related effects.

The initial causes of temperature changes are, Greenhouse gases, Aerosols and soot, Solar Activity and Variations in the Earths Orbit.

Arctic warming, made worse by greenhouse gas emissions from human activities, is one of the biggest threats to polar bears. A warmer Arctic means less sea ice for the bears to hunt seals on, reducing their access to food. More open water also means more drownings and reduced cub survival.

Protecting polar bear populations and their habitats carries the added benefit of protecting human habitats as well. The Arctic plays a part in regulating the Earth's climate, according to NASA, and climate change in the Arctic is likely to have consequences elsewhere.

What is aimed for  on February 27th

The day encourages people to find ways to reduce their carbon output, such as by turning down their thermostat or driving less.

The day has also been used to encourage the installation of energy efficient insulation in houses.