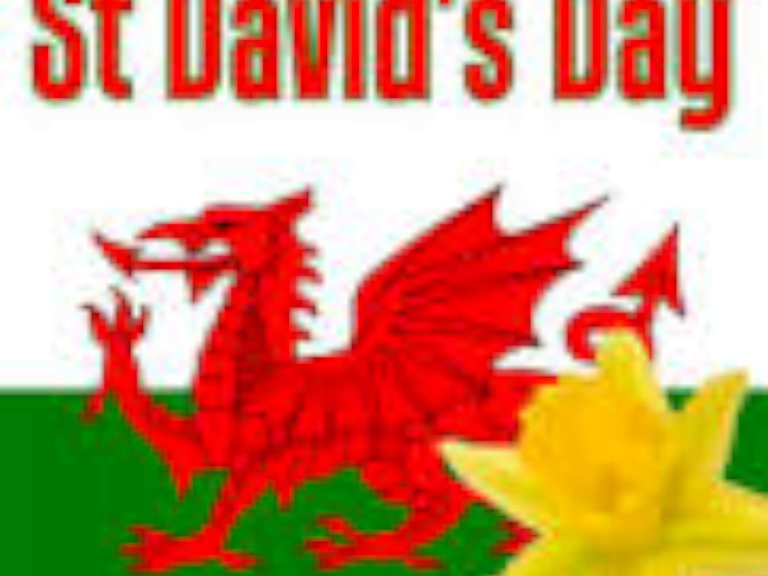 St David's Day is celebrated in Wales on 1 March, in honour of Dewi Sant or St David, the patron saint of Wales. The 1st March is the feast day of Saint David, and is chosen in remembrance of his death.

Feast  in this context does not mean a large meal,  but instead "an annual religious celebration, a day dedicated to a particular saint."

Who was St. David?

According to Rhigyfarch's Latin manuscript, Dewi died in the year 589. His mother was called Non, and his father, Sant, was the son of Ceredig, King of Ceredigion.

After being educated in Cardiganshire, he went on pilgrimage through south Wales and the west of England, where it is said that he founded religious centres such as Glastonbury and Croyland.

Legend has it that he went on a pilgrimage, which led all the way to Jerusalem, where he was made an Archbishop. His miracles, though, happened closer to home – people began making their own pilgrimages to St David's Cathedral, which he founded in West Wales.

Many miracles have been attributed to him, the most incredible of which was performed when he was preaching at the Synod of Llanddewibrefi - he caused the ground to rise underneath him so that he could be seen and heard by all. How much truth is in this account of his life by Rhigyfarch is hard to tell.

After word swiftly spread of his ability to make the earth rise beneath him, suggesting a power which could ward off the invading Normans.

St Davids is one of the great historic shrines of Christendom. Nowhere in Britain is there a more ancient cathedral settlement, for it reaches back fourteen centuries and survived the plunder of the Norsmen in the 'Dark Ages'.

St David chose this wild, beautiful region as the site of his monastery in the 6th century and you will find his shrine in the purple-stoned cathedral, which nestles inconspicuously in a grassy hollow beneath the rooftops of the tiny city.

Almost 900 years after he was pronounced a saint, St David’s Day is the unmissable highlight of spring in Wales. The National St David’s Day Parade sends a red and yellow carnival across the centre of Cardiff, featuring all sorts of fiery performances from giant dragons and theatrical groups, not to mention star turns from the likes of Tom Jones and Shirley Bassey. A rousing mass rendition of the national anthem, Hen Wlad Fy Nhadau, finishes the procession outside St David's Hall, where there is a special gala concert from the BBC National Orchestra of Wales in the evening.