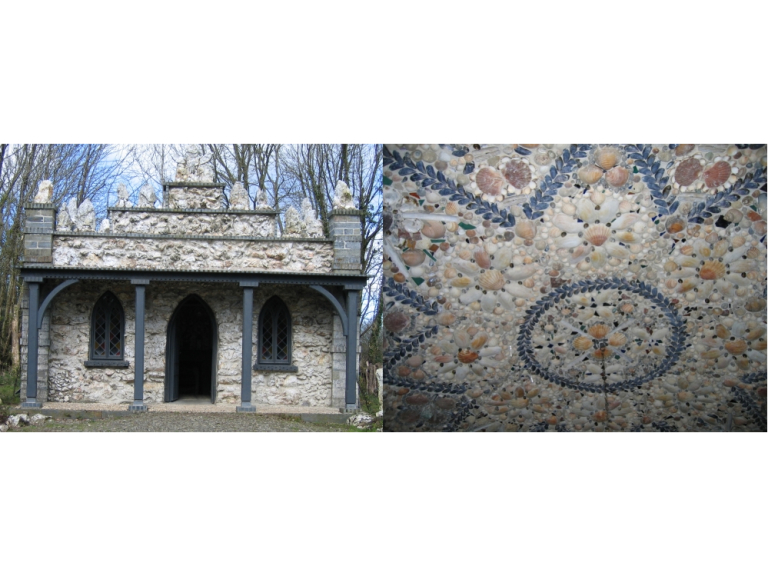 The Cilwendeg Shell House Hermitage is in the grounds of Cilwendeg house, near Boncath in North Pembrokeshire.

Tucked away in woodland at the Urdd Eisteddfod site at Cilwendeg, near Boncath, is The Shell House Hermitage. It’s a real hidden treasure and well worth a visit of you are heading to the Urdd (which runs from May 27th – June 1st).

You approach the hideaway gem through the wonderful woodlands along a path from Cilwendeg Mansion and it appears in front of you like a shining pavilion.

The entire front of the building is covered in white quartz and notched Cilgerran stone.

The interior offers a fantastic surprise for all first time visitors – all the walls and ceilings are decorated with ornamental gothic patterns made of shells, sparkling minerals and pieces of coloured glass.

The floor is made of ornamental ‘tiles’ created from the knuckle-bones of sheep and oxen, arranged in designs representing knots, swirls, hearts, crosses and butterflies.

This treasure was built in the mid 1820s for Morgan Jones Jr. of Cilwendeg Mansion, one of the wealthiest landowners in the Teifi Valley during the early 19th century. The architect is unknown.

The Shell House was created as a small garden retreat for the Jones family.  In winter it was heated by an open fire. In summer it was a place of cool and quiet – and still is.

Morgan Jones Snr  (uncle to the Morgan Jones who had the Shell House built) was renowned for his ‘reclusive habits, wealth, piety, and benevolence’.

In the Welsh bardic tradition, Jones Snr. was one of the Teifiside squires to merit an elegy: Hen Gymro trwyadl oedd efe (he was a thorough Welshman) —‘of ancient lineage and charitable works’.

The Shell House recalls the origins of the place name ‘Cilwendeg’ or ‘gilwendeg’, which translates from the old Celtic as ‘the fair white nook’.

It was restored several years ago by The Temple Trust. Well worth a visit.

Hi I am part of thebestof team and help Diana promote and shout about our great local business members and also all the other great things that happen and go on in Pembrokeshire.