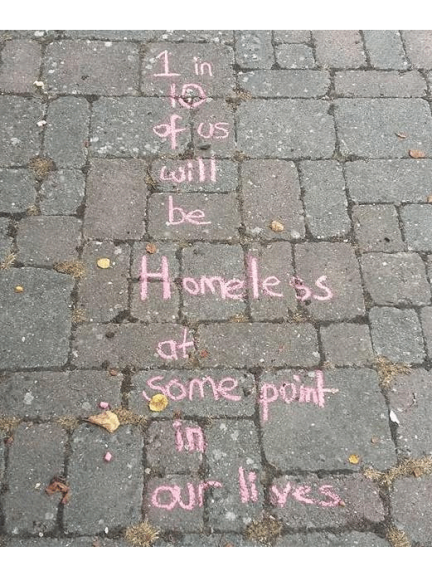 Oxford charities break down barriers with ground-breaking video project to mark World Homelessness Day at a time of growing vulnerability to homelessness in our city.

“Not Just Homeless” is a powerful film that challenges our preconceptions about homelessness in Oxfordshire. The project follows the journeys of local people affected by homelessness and gives them the chance to tell their stories from their point of view, breaking down stigmas and challenging stereotypes about what it means to be homeless in the process.

It is the result of an exciting and ground-breaking collaboration between homeless people, students and employees at Aspire Oxford and Oxford Homeless Pathways, with contributions from many other Oxfordshire charities and organisations.

In 2015, Oxford became the most unaffordable city to live in England and has seen a notable increase in rough sleeping and homelessness. Oxford is experiencing a major housing crisis and suffers from a growing shortage of affordable and social housing. With major cuts expected to council and welfare budgets, the future looks even more uncertain for people at risk of homelessness.

It’s vital that people affected by homelessness can have a voice in our community, and so Oxford-based organisations Aspire Oxford and Oxford Homeless Pathways have come together to produce a video exploring the realities of homelessness through individual real experiences.

The screening is a great opportunity to find out more about homelessness in Oxford and to show support for both the people affected and the charities that are working tirelessly to change lives. This is not a ticketed event but we would ask for a suggested donation of £5 per person that will go directly to supporting people affected by homelessness. To reserve your place at the screening please call Aspire Oxford on 01865 204450.

“This is a powerful film that will challenge your preconceptions about homelessness. It comes at a time when many hundreds of Oxford’s low-income residents are facing an increasing vulnerability to homelessness due to skyrocketing rents & bills and draconian benefits cuts. It’s important we create more opportunities that give local people affected by homelessness the chance to tell their stories from their point of view, so together we can break down stigmas, challenge stereotypes about what it means to be homeless and encourage a collective and inclusive response to the problem.”

“When people arrive in our services, it is as if they have a label stuck to their foreheads saying “I’m homeless……..and worthless”.   We are committed to helping homeless people identify themselves as being the people they want to be, not what society perceives them as.  This video project has really helped the participants explore this subject.”

Aspire Oxford is an employment charity and social enterprise that creates real work placements, training and employment opportunities for local people who face severe and multiple disadvantages to entering employment, such as homelessness, substance misuse and offending. Aspire also delivers a weekly ‘Job Club’ service in four areas of Oxford City, including Blackbird Leys, Barton, Littlemore and Wood Farm, to support local residents to develop their employability and to enter into employment.

Aspire is a registered charity and a private not-for-profit company limited by guarantee.

Oxford Homeless Pathways provides a range of services for homeless and recently homeless people aged 22+. We help people tackle the issues that have led them to become homeless and to build confidence, develop new skills and put in place plans to change their lives.

We aim to provide swift, effective, creative and lasting responses to transform the lives of people who find themselves homeless. This includes:

Tim and I own and run thebestof Oxford, a local online and offline marketing service for the best recommended businesses in the Oxford area. Our award winning website showcases these businesses, as well...