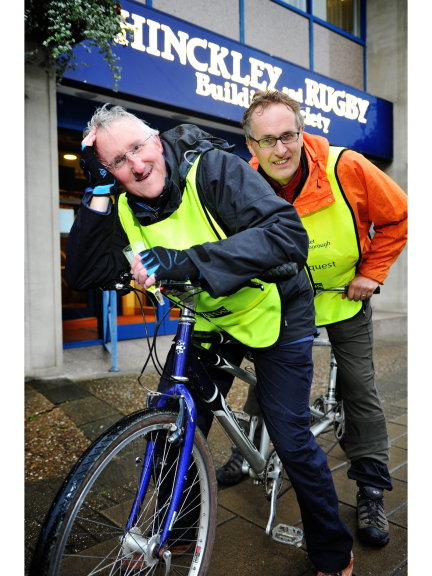 There was billowing drama when the Stanley Steamer sprang a leak, but owner Peter Stevenson of Lutterworth got to work fashioning a new pipe to keep the quest on track.

Starting from Market Harborough Building Society’s HQ, they were welcomed by staff at the building society head offices in Melton Mowbray, Loughborough, Shepshed and Earl Shilton before pedalling the final leg through the rain to Hinckley & Rugby Building Society’s HQ.

Along the way Chris and Mark picked up sponsorship from the building societies and their staff. The challenge is part of the Grant Thornton Executive Quest, an annual initiative raising thousands for LOROS and PROSTaid each year. People in business and other walks of life in Leicestershire take on personal goals to attract sponsorship.

Chris told us: “It was quite a journey, with plenty of incidents, and we met some lovely people along the way who had volunteered to help us with the transport. So a big thank you to everyone who helped us raise thousands of pounds for two great local charities.”

Mark Robinson said: “Leicestershire has more building societies than any other county so it was fun to link them all for these great causes. It was a day to remember as everyone we met was so generous with their time and prized cars, horses, boats, bikes and tractors. We hope to break the £6,000 barrier by the time we have all the pledges in.” Chris and Mark both wish to thank:

Martin Hill of Bray & Bray for the buggy

David and Vivienne Bull and their narrowboat First Fruits

Murray Maclean for his Alvis 12/50

Boyd Exell and driver Eduard Simmonet for taking the reins

Adam Palmer for his tractor

Peter Stevenson and his Stanley Steamer

Rob Brown for the tractor and trailer ride

Anyone wishing to can still sponsor, please go to: http://uk.virginmoneygiving.com/team/buildingsocietiesexecutivequest