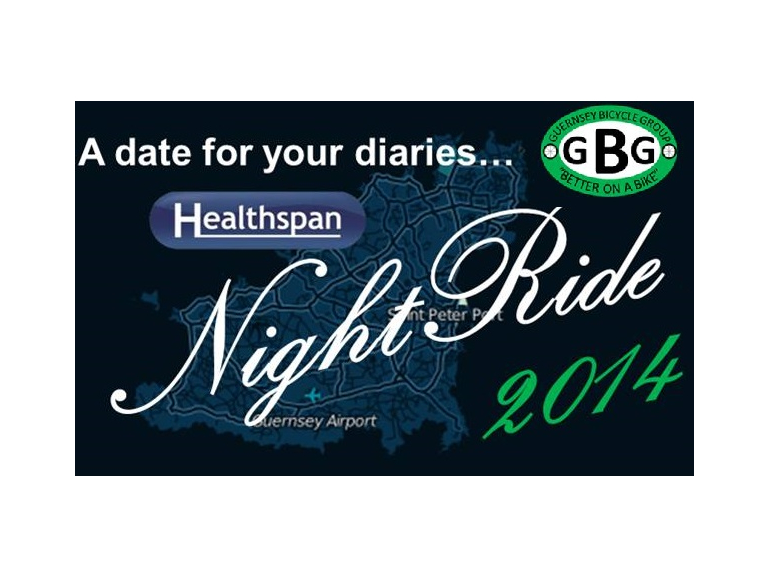 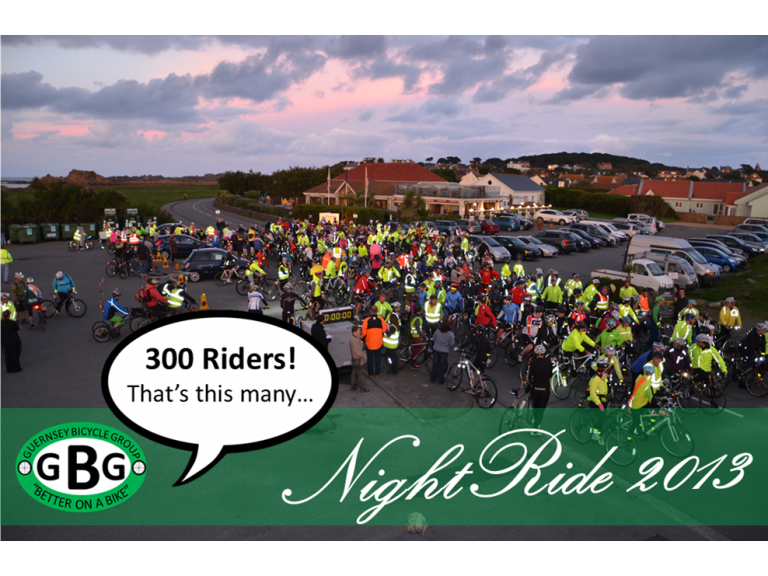 The Guernsey Bicycle Group is organising another NightRide, after the inaugural event last year was so successful and popular. The first NightRide last year saw over 300 local cyclists raise more than £7,000 for charity by riding around the moonlit roads of the island one evening.

Rollo de Sausmarez, Chairman of the Guernsey Bicycle Group commented: "Cycling is rocketing in popularity and we’re delighted that Healthspan’s NightRide will help even more people discover how fun, sociable and safe riding a bike can be. Last year the 300 people riding together created a truly magical atmosphere and this year it can only get better!"

This year the NightRide is being held on 11th October and is again backed by Healthspan with the support of the Guernsey Police, local Civil Protection Volunteers and St John's Ambulance.

The organisers hope to persuade even more local cyclists, of all ages and fitness levels, to participate and help in raising sponsorship money for this year's good causes: The Priaulx Premature Baby Foundation and Autism Guernsey.

Ann Outram, Corporate Relations Manager for Healthspan, said: "It was brilliant to see so many enthusiastic participants last year and judging by the initial interest shown already, we are looking forward to another fun, well supported event this autumn. We hope that eager cyclists will be keen to take part and raise sponsorship to benefit our two chosen local charities for this year."

With cyclists of various abilities in mind there will be four carefully planned routes available, all starting from Vistas Café at Vazon Bay at 5.30pm on Saturday 11th October 2014. Cyclists of differing abilities can choose to ride whichever course that they think will suit them best.

The Sunset Cruise is a 10 mile ride over flat terrain, expected to take up to an hour to complete. The route has been selected to be the easier option for those not confident in completing the longer courses.

The 25 mile Moonlit Meander and 50 mile Night Shift are intended for more experienced cyclists, taking up to 3 hours to complete and will include hills. The 75 mile Nihilist Nocturne is the tough endurance route, designed for serious regular cyclists looking for a good fitness challenge over 4-6 hours.

Andy Graham, Chief Operating Officer for Autism Guernsey, who are due to benefit from this year's NightRide, commented: "I am delighted that Autism Guernsey has been chosen as one of the benefactors for the Healthspan Nightride. As a relatively new and expanding event it fits with our own status as a relatively new, and growing charity. Funding from this event will be used to support the development of a unique Youth Club which will integrate both autistic and non-autistic teenagers."

There will be prizes awarded on the night of the event for the best fancy dressed cyclist, best decorated bike, best creative under 16 cyclist, most unusual bike, best lit bike, and for the corporate team that raises the most sponsorship money. Every cyclist will also be given free wheel lights for the event to help light up Guernsey for the night!

The Priaulx Premature Baby Foundation is also due to benefit from this year's NightRide. This local charity was founded by Triple World Touring Car Champion, Andy Priaulx and his wife Jo ten years ago, following the premature birth of their own children. Jo Priaulx said: "We are absolutely delighted that the Priaulx Premature Baby Foundation has been chosen as a beneficiary of this fantastic event. It is only with the generous support of islanders that we can continue to help give the most vulnerable babies born in the Bailiwick the best start in life. We are now in our 11th year and so excited about what the next ten years will bring."

The entrance fee is £10 per person, whether you are in a corporate team or taking part as an individual, and each participant will be expected to raise at least £5 of sponsorship.

If you are interested in taking part as a cyclist in this year's NightRide, or wish to volunteer as a route marshall for the event, then please email nightride@healthspan.co.uk, or phone Luisa on 01481 711321.