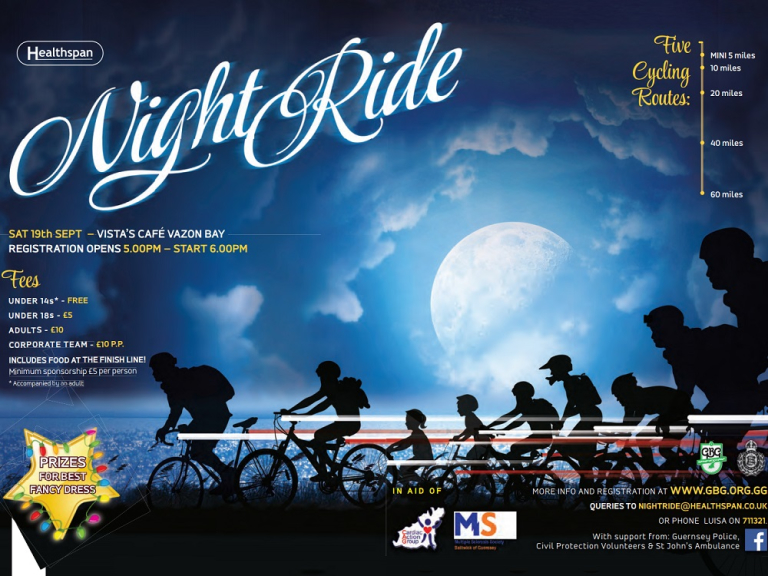 Two years ago the first ever Night Ride saw over 300 riders raising £7,000 for charity and last year around 400 riders raised £9,000 for charity. The organisers hope that this year's Night Ride, on 19th September 2015, will continue to grow, gain in popularity, and raise even more money for this year's charities the Cardiac Action Group and the Guernsey branch of the Multiple Sclerosis Society.

Organiser, the Guernsey Bicycle Group is Guernsey’s largest cycling group with around 1000 members. Chairman, Rollo de Sausmarez, told us: “We had almost 400 taking part last year, many of them in fancy dress which made for a great atmosphere. This year we are planning simpler, easy to follow routes and gearing up for even more people to be involved to discover how fun, sociable and safe riding a bike at night can be. We’ve introduced a new family friendly route that we know will be a popular addition.”

This year sees the addition of a new family friendly ‘NightRide Minis’ route. This flatter and straightforward route is a six mile cruise along Guernsey's beautiful west coast road, setting out just before the sun sets.

There are four other cycling routes to ensure that there is something for cyclists of all ages and ability levels: The 10 mile Sunset Cruise runs from Vazon to Pleinmont and back again; the 20 mile Twilight Tootle is a circular route; while the 40 mile Roaring 40 and the 60 mile The Nocturnalist route are designed with more serious cyclists in mind, those who want to challenge themselves.

Healthspan’s Corporate Relations Manager, Ann Outram commented: “We are looking forward to another fun, well supported event this autumn. Riders are being encouraged to go the extra mile by making themselves and their bicycles brightly lit and decorated for the occasion with prizes for the best fancy dress in various categories. Every rider is being asked to raise a minimum of £5 for this year’s chosen charities Cardiac Action Group and the Guernsey branch of the Multiple Sclerosis Society”.

The sponsorship raised will be jointly shared between both charities. With their share of funds the Cardiac Action Group will continue raising awareness of cardiovascular disease in the island and helping to fund the care of cardiac patients.

The chairman of the Cardiac Action Group, Gareth Corbett, said: “I am delighted that the Cardiac Action Group has been chosen as one of the benefactors of the Healthspan NightRide in support of our campaign to continue to extend awareness off and the reach in providing Public Access Defibrillators in more island locations.” Since 2012 the Group have placed 14 Public Access Defibrillators around the island.

The other charity to benefit from this year's Night Ride, the local branch of the Multiple Sclerosis Society, helps supplement the support and services provided to MS patients in the island. Chairman, Steve Le Page, commented: “We are always grateful to receive donations from companies and individuals and we are delighted that we will be sharing the sponsorship raised by this year’s NightRide participants. Substantially all the funds we raise are used locally, with a small proportion being sent to the UK Society to fund research into curing MS or mitigating its symptoms.”

To register for Night Ride 2015 check out the details on our event page.