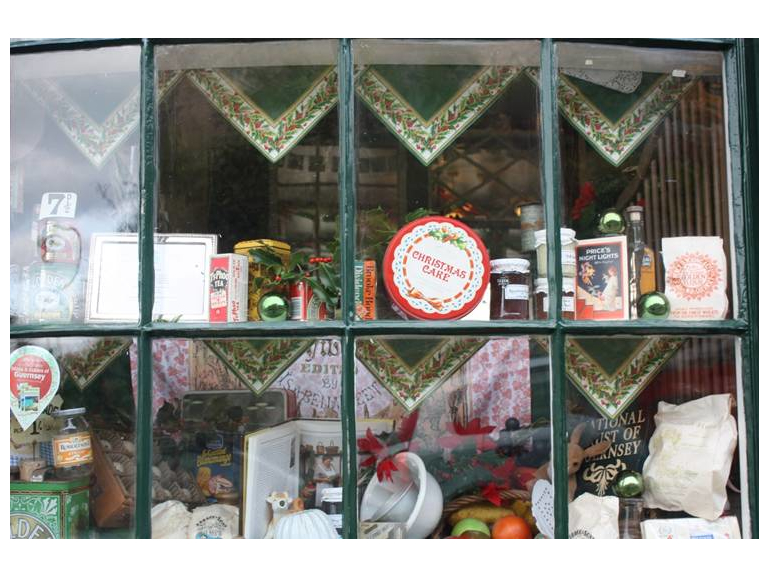 Guernsey's National Trust are running two Christmas shops this year, at Saumarez Park and in Cornet Street in Town. If you are looking for something charmingly traditional, uniquely local and absolutely delightful to give as a gift this Christmas then you simply must pop in and see what they have!

The Saumarez Park shop is inside the National Trust of Guernsey's Folk & Costume Museum inside the park grounds. It is open Tuesdays to Saturdays inclusive, from 10.00am until 4.30pm, up until Saturday 20th December 2014. The shop is closed on Sundays and Mondays. There is plenty of parking. There will also be mince pies and mulled wine available every Friday and on the final Saturday.

This shop will be selling a mix of items, including sugar mice and other traditional confectionary, Belgian chocolates, jams, chutneys, honey, curds and mustards. Traditional childrens toys are also available from spinning tops and tool boxes, to string puppets and even aircraft carriers - if you want your child to step away from technology and appreciate handcrafted toys then this shop should be your first stop!

The National Trust of Guernsey is a big supporter of traditional children's games and family time, but is not past throwing in a few sneaky treats for the adults as well!

The Town shop is at 26 Cornet Street in St Peter Port and will be opened by HE Lieutenant Governor Air Marshal Peter Walker and Mrs Walker on Thursday 4th December 2014 at 10.00am. This shop will be open Thursdays from 10.00am until 8.00pm for late night opening, and on both Fridays and Saturdays from 10.00am until 4.00pm, until the final day on Saturday 20th December 2014. The shop is not open Sunday to Wednesday.

Amongst its many gift ideas this shop will be selling more of Sara Hall’s Dickensian mice, which sold out in just two days last year. There will also be a specially commissioned tea towel on sale using Justine Torode’s painting of 26 Cornet Street.

Hurry on down before stocks sell out!

Both Christmas shops will only remain open until Saturday 20th December 2014, so if you are still looking for that uniquely special Christmas gift - there's no time to waste!