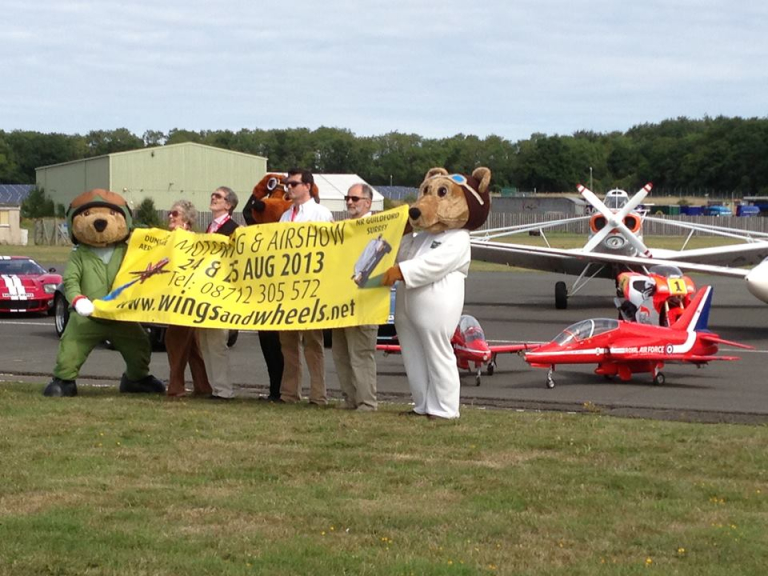 The best of Farnham were kindly invited along to the Wings & Wheels press launch. The day was a preview of just some of the fantastic things that will be happening at the The 9th annual Wings & Wheels which will be held over the August Bank holiday weekend; Saturday 24th & Sunday 25th August 2013.

Following our arrival at the Aerodrome at Dunsfold Park, we were treated to the sight of Guy Westgate from GliderFX performing some amazing aerobatics in his MDM-1 ‘Fox’.
Once Guy had landed safely, we then saw the Reds Duo team who are the reigning Model Aircraft World Champions. The team are made up of father and son duo Steve and Matt Bishop. Having seen the planes close up on the ground (including miniature pilots!) they are fantastic replicas of Red Arrows Hawk aeroplanes, just 1/4 of the size. The models were flown in a formation display which if you didn't know any different you could easily mistake them for the real Red Arrow, even down to the red, white, and blue vapour trails. Both Steve and Matt hold private pilots licenses’ and describe the models as ‘harder to fly than the real thing’.

Finally we were privileged to see the rare version of a famous and much loved classic British fighter, the 1942 Hurricane flown by Peter Teichman. The Hurricane is a historic former Royal Canadian Air Force aeroplane, and we were enthralled to see it's manoeuvres, and safe landing.

Next up for us, was a guided tour in an around what could be Britain’s most famous Boeing 747. You've seen it beside the track on Top Gear, in films such as James Bond in Casino Royale and the Da Vinci code and will soon see it in the James Hunt Biopic Rush, starring Chris Hemsworth. Most exciting for me, was that Alexander Orlov, that adorable little Meerkat also filmed on of his adverts on this plane! The 747 is available to hire for training and filming, so a lot of work has been put into making it as accessible and customisable as possible. I did take a few minutes to go upstairs and sit in the Pilots chair too, well you have to really don't you. This guided tour will be open to the public during the weekend of the Wings and Wheels festival, and is an absolute must see whether you love aeroplanes, or just want to see where so many great adverts, films and programmes have been filmed. And watch out for the Dinosaur!

If that wasn't enough just as a special treat, we ended the day doing something I have always wanted to do. Following in the footsteps of the greats such as Lewis Hamilton, Michael Schumacher, Tom Cruise and of course The Stig... we were not only treated to a display of some of the amazing cars on display as they took to the Top Gear Test track, but we also got harnessed in ourselves and were taken on high speed passenger rides in cars such as the Stunning dream car Ferrari F40 as well as Ford GT40, AC Cobra, E-Type Jaguar’s and a Yamaha Formula 1 Racing Sidecar from Des Lindsey.. If that’s not one for the bucket list I don't know what is!

The collection of modern and historic cars and motorbikes that we saw were from Brooklands Museum which included John Reaks’ Benetton B190 which was used in the 1990 Formula One season. This was the car driven by Nelson Piquet when he won the final two races of that year, in Japan and Australia, coming third in the drivers’ championship.

Visitors to the Wings and Wheels festival will be able to watch these and other stunning cars in the Brooklands Motoring Demonstration.

What’s going on at the Festival?

Wings & Wheels is promoted by Dunsfold Park Limited and in 2013 will be assisting fundraising efforts for Brooklands Museum Trust and Help for Heroes.

Elaine Koczubik is the Marketing and Events Director at thebestof Farnham.
If you are looking to find more customers, raise your profile in the local area and have fun doing it, give Elaine a call on...