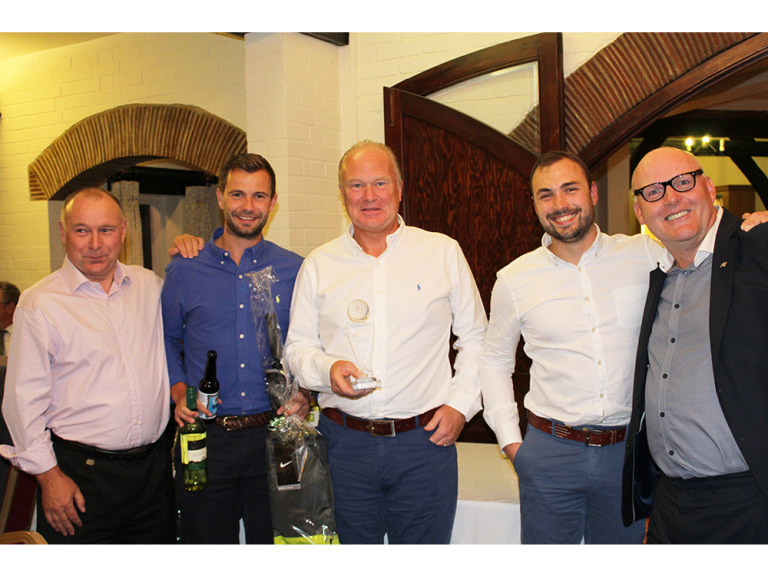 Glorious sunshine greeted the teams as they met for bacon rolls, before a 1pm shotgun start kicked off the afternoon’s golf. The format was 4 ball Stableford, with 18 holes followed by a three-course dinner and prize giving, after which comedian and golfer Adger Brown – back by popular demand - once again provided the entertainment with his hilarious after-dinner speech. A raffle and auction added to the amount raised, giving a fantastic total of just over £11,000.

In a closely-fought contest, the team from Exclusive Networks clinched first place, after a countback on the last three holes pronounced them the winners. Team captain Neil Ledger commended West Surrey Golf Club on the excellent condition of the course despite the previous day’s heavy rain, and praised the excellent catering. He also thanked Phyllis Tuckwell’s Fundraising team for a well-managed and enjoyable day, which many of the participating teams said they looked forward to taking part in again next year.

“We are thrilled that our Corporate Golf Day was once again a great success,” said Georgi Robinson-Welch, Corporate Partnerships Manager at Phyllis Tuckwell. “It gave local businesses plenty of opportunities to meet and network with other local businessmen and women, at the same time as enjoying a great round of golf - and all whilst supporting their local Hospice Care charity! We have to raise over £15,000 a day to be able to provide the supportive and end of life care which we offer patients and families affected by cancer or other serious progressive illnesses, and rely heavily on the generosity and support of local fundraisers and businesses to do this.”

On display throughout the day was a three-door Ford Fiesta, to illustrate the fleet of four cars which Phyllis Tuckwell is planning to buy for its Community and Hospice Care At Home teams. The charity is offering corporates the chance to sponsor one or all of these white cars, which would then be branded with the corporate’s logo. For more information, call Georgi Robinson-Welch on 01252 729462 or email georgi.robinson-welch@pth.org.uk

For press enquiries and alternative pictures contact: Jen Barnes at Phyllis Tuckwell on 01252 729433 or email jen.barnes@pth.org.uk