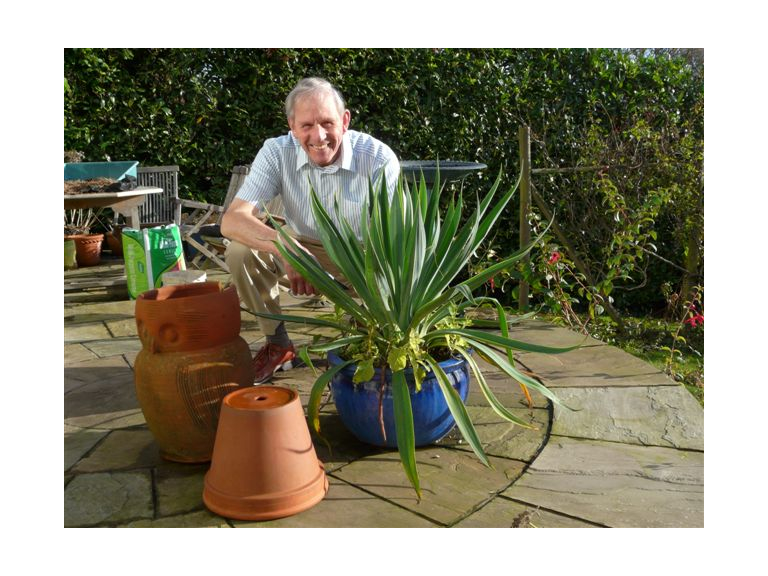 Plant climbing and rambling roses to clad a sunny wall. Set them 2ft (60cm) from the moisture-absorbent brickwork to reduce risk of roots drying out in summer.

Feed shrubs, border perennials and alpines with 4oz (112g) per sq m of phosphate-rich bone meal. It will break down over the next few months to feed plants for around three years.

Water cacti and succulents which have been kept dry over winter, to plump them up for spring and summer.

Prune Large-Flowered  Hybrid clematis and Viticella varieties by shortening last year’s stems to a pair of buds 4-6in (10-15cm) from the soil. Follow in April by feeding with growth-boosting Vitax Q4.

Help rhubarb develop long and succulent stems by mulching with 4-6in (10-15cm) of old manure or well-rotted garden compost. Mix it with a ‘whitening’ of fish, blood and bone meal.

Plant of the month

Sounds whimsical, I know, but the plant was new to me last year and I want to grow more of it. Botanically Synthyris missourica, it colonises woodlands in West and Central North America.

Easy to grow and enjoyed for its appealing ‘plates’ of small circular, bluntly toothed leaves and thrusting 4in (10cm) cones of  deep lavender blue flowers, it makes spring special.

Happy in light shade – it tolerates a draughty passageway between our house and garage – it flourishes in humus-rich and moisture-conserving soil. Our one plant has become four and a multiplicity of blooms draws us daily to admire them.

Remember, it hates winter wet. If the water table rises to an uncomfortable level then, work in a bucketful or more of grit or pea shingle when planting it.

We know that grey squirrels devour more bird seed than avian visitors, but who would have thought that they were so keen to devour the bark of 750 beeches flanking the A38 near Bodmin that Highways England decreed that it was vital to fell them? Why? Because a barkless beech will die and dead branches would endanger cars. Locals are furious.  Couldn’t something else have been done to tackle the problem?

I am so pleased. Sue Biggs, the Royal Horticultural Society boss, has been made a Commander of the Order of the British Empire (CBE). After joining the 212 year-old RHS gardening charity in 2010, she has seen membership rise to 467,00. She and her team have also invested £160 million to advance horticulture… and have pioneered the Society’s fifth garden – RHS Bridgewater in Salford, which will open in 2019.

It’s celebrated lady gardeners I admire. In a Virago book I’ve discovered about their horticultural prowess, the editor, Deborah Kellaway, looks at the contributions made by keen plantswomen.

I’m fascinated by her observations. I thought you would be, too.

‘An important matter is that of staking and supporting. The rule, as I venture to lay it down, is that sticks and stakes must never show. They must be so arranged that they give needful support while allowing the plant its natural freedom; but they must remain invisible’.