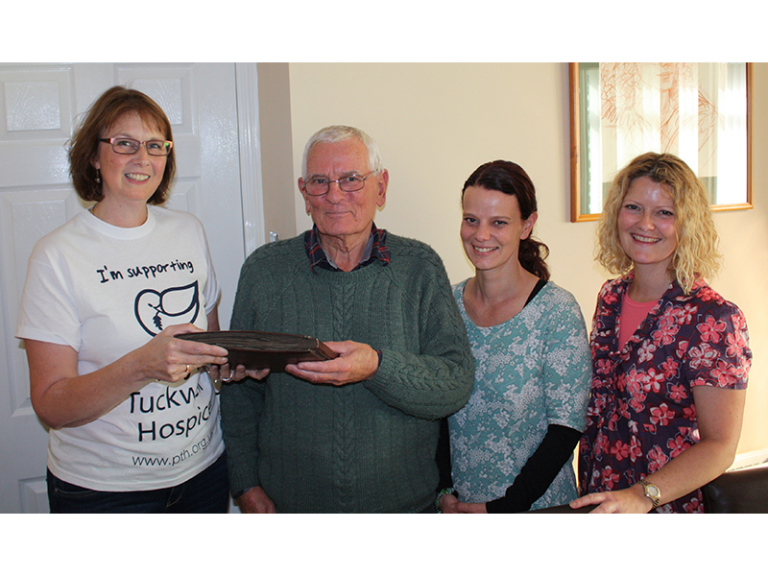 This was the dilemma faced by Paula Kennedy and Sue Saunders, manager and volunteer at Phyllis Tuckwell’s Godalming shop, earlier this year.

The item donated was an album containing over 200 family photographs dating from the mid 1920’s to early 1940’s. Phyllis Tuckwell has over 20 charity shops across West Surrey and North East Hampshire and receives many donations from its generous supporters, but this was something a little different from usual! Paula and Sue immediately realised the importance of such a find, and Sue took the album home to search for clues about the family it belonged to.

Despite containing so many photographs, the album gave little away, as only around a quarter were captioned and mostly with forenames only. However, two major clues started Sue on a journey of discovery which would take two months to conclude…

The first clue was a small batch of photographs of family members at a property called ‘The Poplars’. No location was given, but a web search showed that it was in Wales and had been on the market just two years ago.

The second clue helped Sue to narrow down her research even further – one complete forename and surname. Using this, and the few surnames which had been in some of the album’s captions, Paula and Sue trawled through Census records and the National Archives, and were finally able to track down the name of the album creator – Jenny Hefin Jenkins, born in the Swansea area.

The task now was to concentrate on finding Jenny’s descendants. Sue went back to the internet’s genealogy sites, where she found a post dating back to 2002, which started a trail leading to a lady named Kate Niblett (nee Jenkins). Emails and telephone conversations confirmed the link – Kate was Jenny’s great-niece! The only thing left was to reunite the album with its family.

Just a few weeks later, Sue and her husband journeyed to Wales to meet Kate and give her the family photo album. Kate’s father Anthony, sister Emma and cousin were also there to greet Sue, and all were delighted at the find.

Because Phyllis Tuckwell cares so much about local people, it came naturally to volunteer Sue to try to track down the album’s owners, no matter how great a challenge it might be! “In my heart I felt that the album had to be reunited with its family,” she says. “I would have been thrilled if someone had found it and done the same for me, so I stuck with the task in hand.”

There was, however, and still remains, some puzzlement as to how the album came to be given to a charity shop in Surrey. Another mystery is a Jenkins family Bible which at one time accompanied the album. It was not given to the Phyllis Tuckwell shop – so perhaps it is still out there somewhere?