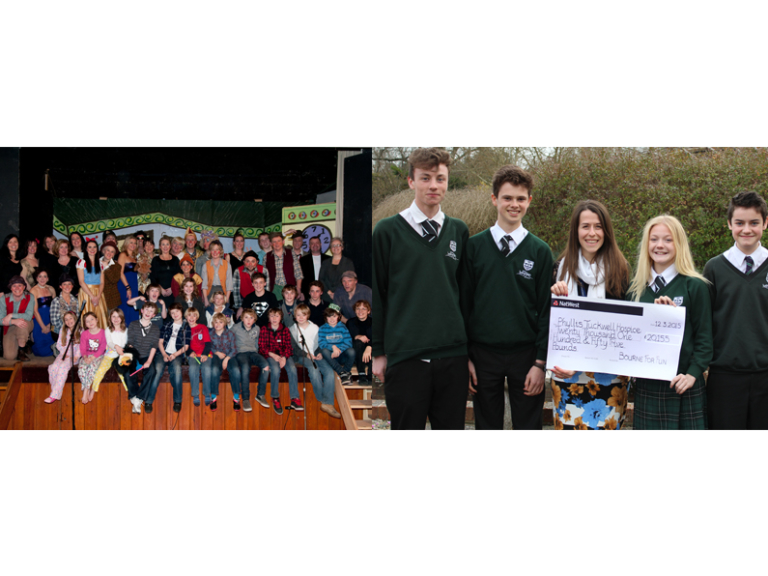 Oh yes it is! The Bourne panto has raised a whopping £20,155 for local hospice Phyllis Tuckwell, which provides supportive and end of life care to patients and families affected by a terminal illness.

Robin of Bourne Woods is the third pantomime which local group Bourne for Fun has organised in aid of the Hospice, and its four performances boasted a total audience of over 1,200 people! The group worked hard to raise money through ticket sales, performance sponsorship, advertising in the pantomime’s programme and via the group’s JustGiving page, as well as through the sale of raffle tickets, sweets, gifts, programmes and drinks at each performance.

The Bourne for Fun charity drama group was founded in 2008 by local resident Paul Smitherman, who felt that Farnham was lacking a pantomime. Along with director Mark Ashdown, he encouraged a group of local parents to put on a show to raise money for charity – and together they decided upon Phyllis Tuckwell as their charity of choice.

The pantomimes have run every third year since then, with 2008’s Aladdin raising £7,500 and 2011’s Snow White topping a fantastic £11,000. In 2014, in a bid to raise even more money for the Hospice, the group decided to move venues, swapping the old Bourne Hall on Vicarage Hill for Frensham Heights School, who kindly allowed them to use their award-winning Aldridge Theatre to stage the production, the weekend before Christmas.

To keep costs down, every element of the pantomime was carried out by volunteers - from the design and building of the set, to the costumes, advertising, sponsorship and of course the performance itself. Around 45 local people were involved, including five students from Weydon School who volunteered their time at every rehearsal and performance of the pantomime as part of their Duke of Edinburgh Award.

Over the years, the group’s choice of Phyllis Tuckwell as its beneficiary charity has become a much more poignant one, as a number of cast members have had personal experiences with the Hospice after relatives and friends have received treatment there. This was especially so when Conor Cassidy - husband of Jackie who has starred in all of the pantomimes - died at the Hospice in 2014. Seeing first-hand the amazing care and support given to Conor and his family by Phyllis Tuckwell, Conor’s company Lanware decided to become main sponsors of the pantomime.

“We would like to thank the Bourne for Fun group for the huge amount of money which they have raised for the Hospice,” said Ashleigh Tennent, Community Fundraising Manager at Phyllis Tuckwell. “They are incredibly dedicated and always put a huge amount of time and effort into organising and rehearsing for these pantomimes - and we would like to thank them for choosing to donate the money they have raised to Phyllis Tuckwell.”

“We would really like to thank the whole local community who donated their time, raffle prizes and props,” said Bourne for Fun’s Bridie Christie. “But most importantly we would like to thank the audience, who bought tickets, gave so generously on the night and laughed at our jokes!”

Every day Phyllis Tuckwell supports over 140 patients and relatives in their own homes, in the community and at the Hospice. However, as NHS/Government funding covers less than 15% of its costs, it has to raise over £15,000 a day, and relies heavily on the local community to help it do this - which is why fundraising events such as the Bourne pantomime are so important.

(Left) The cast and crew of the Bourne panto