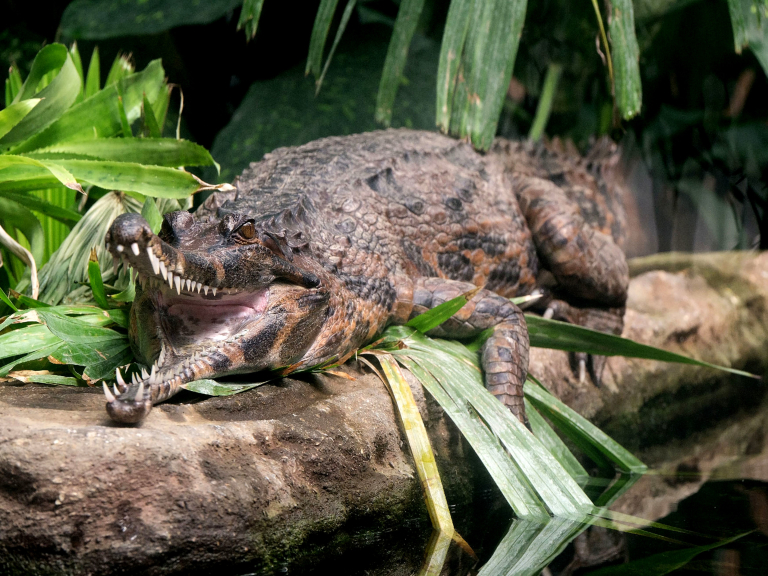 Paignton Zoo has moved one crocodilian out and another one in. The animals are Tomistoma – also known as false gharials.

There are just seven false gharials (Tomistoma schlegelii) in the UK: three are at Paignton Zoo; two at Chester Zoo and two at Crocodiles of the World in Oxfordshire. There are only 30 in the whole of Europe. The European Stud Book (ESB) is held at Fuengirola Zoo in Spain.

The animals were moved by a specialist transport company with a van adapted for the task and an experienced driver. In each case the animals walked into their crates with minimal stress for both them and their keepers.

The move was a straight swap with Leipzig Zoo, Germany, with Paignton Zoo’s 10-year old male Pinocho departing, to be replaced by Lima, a female who is 11 and described as “very shy”. The moves were requested by the coordinator of the European Stud Book. The ESB is a record of all the births, matches and deaths for the species in top zoos across the continent.

The false gharial (Tomistoma schlegelii), also known as the Malayan gharial and Sunda gharial or simply Tomistoma, is a freshwater crocodilian with a very thin and elongated snout. It is classed as Vulnerable by the IUCN, as the population is estimated at under 2,500 mature individuals.

The false gharial is native to Malaysia, Sarawak, and Indonesia, where it inhabits rivers, swamps and lakes. It is threatened with extinction through much of its range because swamps are being drained and forests cleared. It is also hunted for skin and meat, while eggs are harvested for people to eat. Paignton Zoo Environmental Park is a registered charity. For more information go to www.paigntonzoo.org.uk or ring 01803 697500.