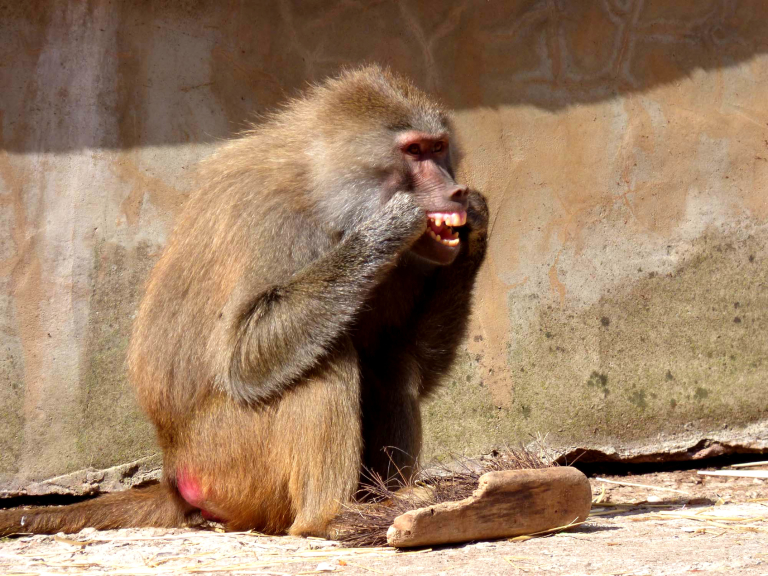 Paignton Zoo volunteer Liz Chisholm, who took the photos, said: “As I passed Baboon Rock I noticed that the baboons had been given broom heads to play with.” Some young baboons were seen sweeping with them, possibly mimicking the actions of their keepers.

“One of the older baboons was inspecting her broom head. Then I saw her pull out a bristle, examine it, pull it taut between both hands and very deliberately start to floss her teeth. She did it several times, both top and bottom set. I only saw the one baboon behaving like this, but she had several pupils, as she was being watched by other baboons.”

Curator of Mammals Neil Bemment explained: “The baboon is called Georgia and yes it is flossing of sorts as she is passing it between her teeth either to flick food out or because she likes the sensation. A number of the Sulawesi crested macaques do it, too.”

So, while zoo keepers clean their enclosure and provide free meals and the in-house vet team keeps an eye on their health, personal grooming is obviously important to these primates.

Director of Conservation and Education Dr Amy Plowman: “Animals like dogs and even chimps can be taught to do things, which is very clever but it’s much more interesting scientifically if animals spontaneously do something with a tool without being taught, which would be the case with the baboons.”

It’s not the first time that Paignton Zoo baboons have been seen using tools. In 2000 another female hamadryas baboon was observed using a splinter of wood to clean out her offspring’s eye. The incident was reported in Primate Eye issue 72, published in 2000 by the Primate Society of Great Britain.

Macaques in Thailand are known to use strands of human hair to floss. Maybe next Paignton Zoo’s style-conscious baboons will be asking for mouthwash and moisturiser… Paignton Zoo Environmental Park is a registered charity. For more information go to www.paigntonzoo.org.uk or ring 01803 697500.