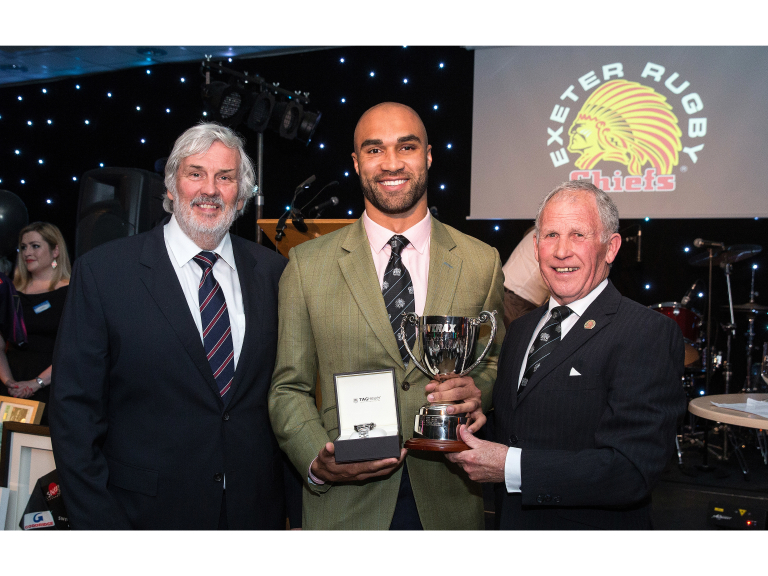 Olly Woodburn described being crowned as the Exeter Chiefs Player of the Year as his “proudest moment” in rugby following the club’s annual awards night on Thursday.

The talented winger, who last weekend was crowned the Supporters’ Player of the Year, scooped the top award in front of a record-breaking crowd of 641 people at Sandy Park.

The 25-year-old has enjoyed a stellar season for the Chiefs, producing not only a number of eye-catching displays, but also helping himself to 11 tries in 24 appearances.

The award, which was selected by Woodburn’s fellow peers, was one of six presented on the night by sponsors and club president Bob Staddon.

“I’m pretty shocked to be honest, I really wasn’t expecting it,” said the former Bath back. “To get the award selected by your team-mates is a huge honour. Without those guys, however, I wouldn’t be able to do what I do, so it’s down to all of them as well.

“It’s been a great season not just for me personally, but for the club as a whole. We’ve got into the play-offs again, but we know there are a big few weeks ahead of us and hopefully we can go one better than last year.”

As well as Woodburn, other award winners on the night – hosted by former Chiefs player Chris Bentley – included: Jack Maunder (Young Player of the Year); Lachie Turner (Try of the Season v Harlequins away); Kai Horstmann (Clubman of the Year) and Will Hooley (Community Player of the Year).

With at least two games still to play this season, the top try-scorer award was not presented, although leading contenders Woodburn, James Short and Thomas Waldrom were all acknowledged for their scoring exploits so far this term.

Alongside the awards themselves, Exeter Rugby Club chairman and chief executive Tony Rowe OBE welcomed guests to the evening head coach Rob Baxter gave a detailed review of the season to date, as well as paying tribute to Haydn Thomas, Matt Jess, Tom Johnson, Ben White, Damian Welch, Dave Lewis, Will Hooley, Geoff Parling, Martin Roberts and Niko Matawalu, all of whom will be moving on at the end of the season, while Mark Stevens carried out a special Q&A with Jack Nowell, Gareth Steenson, Dave Dennis and Jack Maunder.

The evening was also the chance to help raise funds for the club’s official charity, the Exeter Foundation, and by the close the sum raised was just over £26,000 thanks to the sale of European jerseys signed by the whole squad, a raffle and an auction.

Nuffield Health Community Player of the Year: Will Hooley