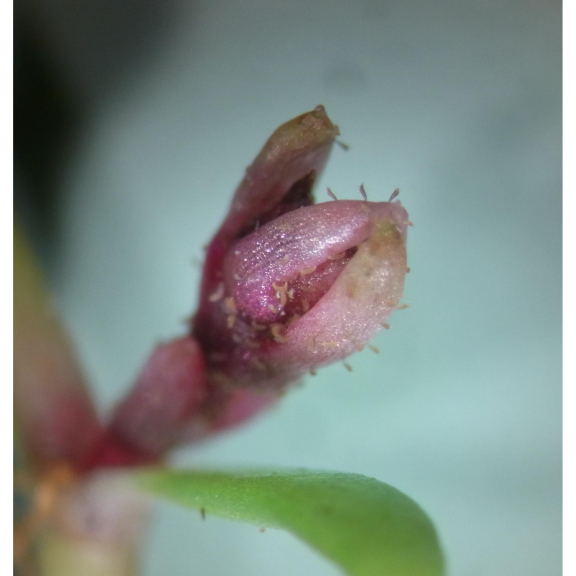 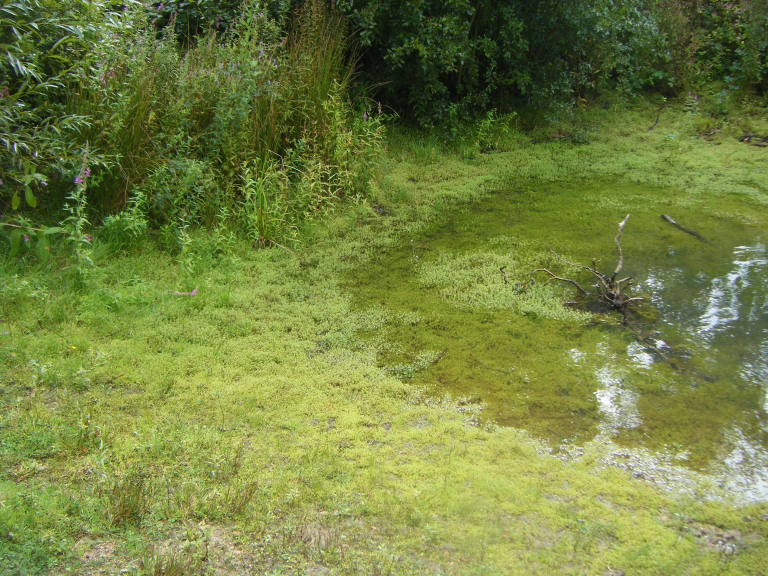 Scientists are stepping up the fight against one of the UK’s most invasive non-native aquatic weeds and an old garden favourite.

Approval has been given for the release of a novel biological control agent – the mite,Aculus crassulae – to assess its ability in the real-world environment to suppress Australian swamp stonecrop (Crassula helmsii), also known as New Zealand pigmyweed. This follows carefully controlled laboratory testing to ensure the safe, controlled release of the mite in the UK.

The weed was introduced to the UK in the early 1900s as a decorative garden pond plant, but is no longer considered appropriate due to its impact on native biodiversity. The plant can form dense mats in still and slow moving water bodies, dominating sensitive aquatic environments and threatening native plants and invertebrates. It can also exacerbate flood risk as well as clogging the pipes and intakes of the water companies.

Crassula helmsii is also present across Western Europe, though is most widespread and problematic in the UK. It is present throughout Cornwall and Devon, but is very under-recorded.

It is hoped that the release of Aculus crassulae, as part of research commissioned by the Department for the Environment Food and Rural Affairs (Defra) and in partnership with the University of Tasmania, the Department of Primary Industries, Victoria and Australis Biological, will help to reduce the spread of Crassula helmsii in water bodies and areas of high conservation status.

The research aims to serve the European Water Framework Directive requirements of ensuring that European waterways reach a ‘good ecological status’ through the management of invasive species.

Sonal Varia, CABI’s lead scientist on the project, said, “Many of the natural enemies – both fungal plant pathogens and arthropod species – collected and identified during surveys were rejected early in the project as potential control agents because they were able to attack other plants closely related to Australian swamp stonecrop.

“However, testing of Aculus crassulae in the laboratory revealed it to be a suitable agent. Mites in this family are renowned for their host specificity and ability to reduce a plant’s fitness. The safety testing demonstrated that this species only feeds and reproduces successfully on its host Crassula helmsii and can significantly reduce plant growth. The next step is to now see how it works under natural field conditions.”

Dr Niall Moore, Chief Non-native Species Officer, Defra, said: “Aquatic invasive non-native species like Crassula helmsii can cause significant harm to our waterbodies and the native plants and animals. After rigorous testing in quarantine, biocontrol approaches such as the release of this mite can provide an effective and sustainable tool to manage invasive non-native weeds.

“Good biosecurity is key to reducing the spread of invasive non-native species; we urge all users of waterbodies to Check-Clean-Dry* their clothing and equipment and gardeners and pond owners to Be Plant Wise**, choosing and disposing of their plants with care.”

This new, release phase of the project, which is also part-funded by Natural England, South West Water and Yorkshire Water, will see the mite released at reservoirs and wetlands in England to determine if the gall-forming eriophyid mite can reduce the weed’s dominance.

Kate Hills, Invasive Non-Native Species Ecologist at South West Water, the first water company to create a dedicated INNS post and to support CABI on these innovative trials, said, “Aquatic invasives are particularly problematic and cause a range of problems for water companies at considerable cost. To date there have been no known effective measures to control Crassula. We are concerned about the range of impacts of Crassula, not least the health and safety issues it can create for recreational water users.”

Rachel Naden, Invasive Non-Native Species and Biosecurity Advisor at Yorkshire Water, said, “We welcome this opportunity to work in partnership with CABI and South West Water to further the development of this novel control measure and hopefully reduce the impact of Crassula helmsii on our assets and Yorkshire’s ecosystems.

“Invasive species are detrimental to our infrastructure, native biodiversity and public enjoyment of our sites and we are committed to playing our part in their control. The use of biocontrol potentially delivers a sustainable and efficient solution to deliver a greater customer outcome at a much lower cost than alternative measures such as the use of herbicides.”

CABI’s research on the mite was presented to Defra as part of a Pest Risk Analysis (PRA) to assess the safety of the mite. The PRA gained ministerial approval after being accepted by an expert scientific panel and by various stakeholders in a public consultation, meaning it is now allowed to be released from quarantine. A summary of stakeholder responses can be found on Defra’s Plant Health Portal.