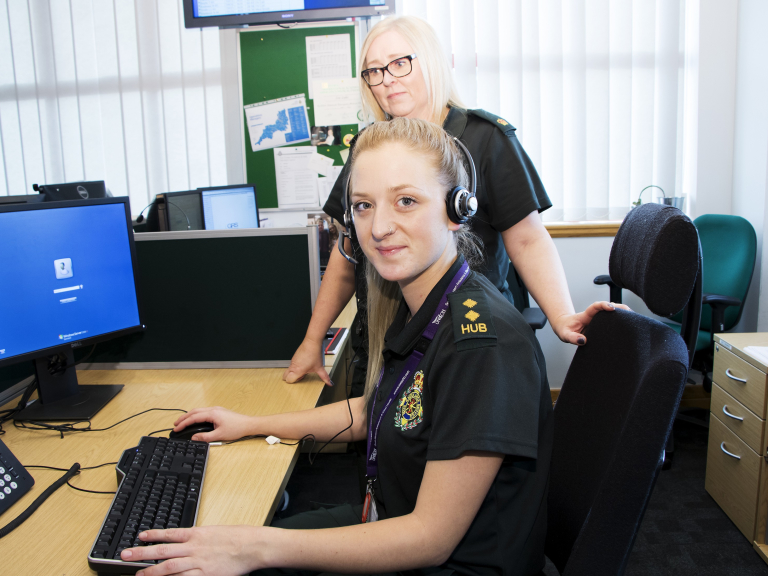 A South Western Ambulance Service NHS Foundation Trust (SWASFT) 999 control hub staff member has been shortlisted for a national award following her heroic actions at the scene of a serious road traffic accident.

Emergency Medical Advisor (EMA) Team Leader, Harriet La Trobe, was on her way home from a busy Friday night shift in the Exeter control room when she saw a van collide with the back of a stationary lorry in queuing traffic on the A38 Devon Expressway.

She said: “There was a loud bang and a large cloud of smoke. The car flew up into the air, and then landed back on its wheels with the roof peeled off. I didn’t think anyone inside would have survived. It was a horrendous scene.”

Now she has been shortlisted for the ‘Life Saver’ accolade at the Unsung Hero Awards 2018.

Harriet said: “I’m delighted to have been shortlisted for a national hero award. I am so excited about the awards ceremony. It will be an honour to represent the Trust, because of what happened that morning.”

The incident occurred on the Plymouth-bound carriageway at Haldon Hill in April 2016. Traffic was at a standstill in the area, due to a separate incident further down the road.

Harriet, who has worked for SWASFT since September 2015, witnessed the crash and immediately dialed 999 to report it.

She found Paul lying on the ground with a serious pelvis injury and a head injury – after he had been pulled from his van. He was also confused, and in a lot of pain.

Harriet said: “There were lots of bystanders, but they disappeared when they saw my green uniform. They probably thought I was a paramedic who knew what I was doing!”

With the help of an army reservist, who had been driving another vehicle, Harriet cared for Paul and tried to keep him awake until an ambulance arrived.

Then she assisted paramedics by them helping to move Paul onto a trolley, supplying him with oxygen, and cutting-off his clothes so that the crew could assess and treat his wounds.

Several weeks later Harriet saw an appeal from Paul to find the woman who “saved his life”. She got in touch with him, and they were soon reunited. He then invited her to attend his wedding later in the summer.

Harriet said: “I wanted to do what I could to help the patient as an extension of my EMA role.

“The crash has helped me to learn so much about myself and my job. And it even prompted me to make some changes in my own life.”

She was nominated for the award by control manager, Zoe Luke.

Zoe said: “Harriet stopped and cared for the patient whilst on her way home from duty, despite not having any clinical training or background. She then assisted the crew in continuing to deliver first class patient care. Harriet demonstrated the Trust's values and behaviours throughout the care and compassion she gave to this patient.”

EMAs give vital lifesaving medical advice, including CPR instructions and other first aid help, to callers to help patients during an emergency.

The Unsung Hero Awards were created to celebrate the hard work of NHS non-medical staff members. The awards will be presented at a dinner ceremony at The Principal Hotel in Manchester City Centre on Friday 23 February.

The other SWASFT staff members shortlisted are: Mike Kemp, Anna Smith and Craig Holmes – all for the ‘Volunteer of the Year’ award.