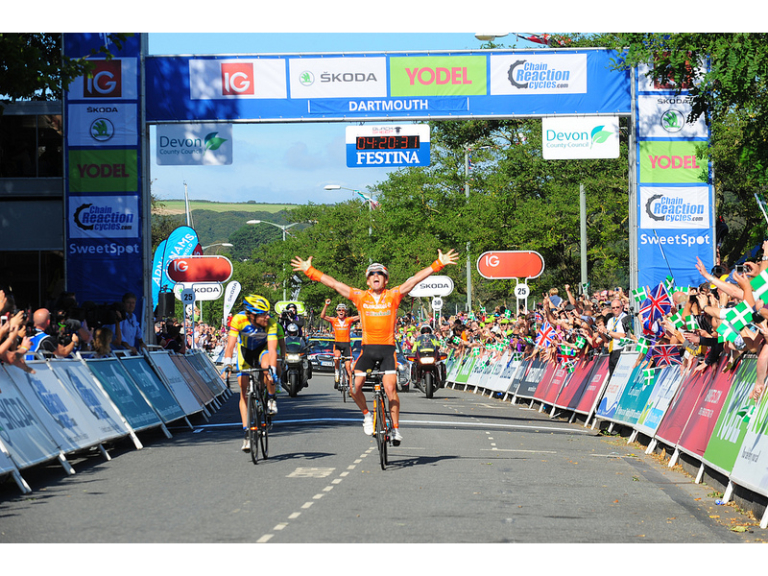 Spectators have 85 miles (137km) of Devonâs roads to choose from when it comes to being part of the 10th anniversary Tour of Britain in the county on Friday 20 September. Crowds are being tipped to exceed last yearâs record of 220,000 spectators that lined the route in Devon, and the advice is to leave plenty of time to travel to where youâre planning to watch the action, in order to avoid delays. Among the world class teams taking part are Sky Pro Cycling, Cannondale Pro Cycling, Garmin â Sharp, Movistar, and Omega Pharma â Quick Step. As well as the start and finish venues, some of the most exciting places to see 114 of the worldâs top professional cyclists competing for the IG Gold Jersey in Britainâs premier cycle race will be the SKODA King of the Mountains climbs at Pennsylvania Road on the outskirts of Exeter, Mamhead, and Six Mile Hill on Dartmoor. The Yodel Sprints outside Blundellâs School in Tiverton, through Exeter High Street and at Chudleigh will offer some of the fastest racing along the route. The Stage also passes through a number of other communities including Sidbury, Honiton, Willand, Moretonhampstead and Bovey Tracey before the challenging climax in Dartmoor National Park. Sidmouth - To enable the Criterium race to take place in Sidmouth, on Thursday 19 September, road closures will be in effect from 5pm to 8pm on: â¢ The Esplanade (Glen Road to port Royal â eastern end), â¢ Station Road (Fortfield Terrace to The Esplanade), â¢ Chapel Road (The Esplanade to Chapel Street), â¢ Chapel Street (Chapel Road to Church Street), â¢ Prospect Place (Market Square to The Esplanade), â¢ Dove Lane (Fore Street to Prospect Place), â¢ New Street (Fore Street to Market Square), â¢ Fore Street (High Street to The Esplanade), â¢ Russell Street (High Street to Mill Street), â¢ Ham Lane (The Esplanade to East Street), â¢ York Street (East Street to Russell Street), â¢ Mill Street (Russell Street to High Street), â¢ High Street (Blackmore Drive to Fore Street), â¢ Old Fore Street (High Street to Market Place), and â¢ Church Street (Market place to The Triangle) Bus and vehicle access to Bedford Car Park on Station Road will be permitted up to 6pm on Thursday 19 September, and on-street parking will be suspended from 4pm on Thursday 19 September on The Esplanade, Glen Road (The Esplanade to Manor Road), Station Road (The Esplanade roundabout towards The Triangle), High Street (Mill Street to Russell Street), Fore Street, Old Fore Street, Mill Street, New Street, Church Street, Market Place, and The Triangle.For the start of the Devon Stage of The Tour of Britain on Friday 20 September, the following roads will be closed to vehicles from 5am to 1pm: â¢Peak Hill Road (Manor Road to Glen Road), â¢The Esplanade (Glen Road to Port Royal â eastern end), â¢Station Road (The Esplanade to The Triangle), â¢Prospect Place (The Esplanade to New Street), â¢Dove Lane, â¢Fore Street (The Esplanade to New Street), and â¢Ham Lane (The Esplanade to York Street) Emergency vehicles only Access will be permitted to Bedford Car Park in Station Road. Fore Street (New Street to High Street), and High Street (Fore Street to All Saints Road) will be closed to vehicles from 8.30am to 12noon. On-street parking will be suspended from 5am to 1pm on Friday 20 September along The Esplanade, Glen Road (The Esplanade to Manor Road), Station Road (The Esplanade to The Triangle), High Street, Fore Street, Old Fore Street, New Street, and Vicarage Road (Salcombe Road towards Sidbury). The A375 (from All Saints Road towards Sidbury) will be subject to a rolling road closure once the race is underway, which is scheduled at 11am. Exeter - The race is expected on the outskirts of Exeter at around 12.30pm, although race timings may vary. There will be rolling road closures on Pennsylvania Road (from outskirts of Exeter to Prince of Wales Road / Union Road junction), Countess Wear Roundabout, and Bridge Road / Sannerville Way and onto Exminster. A number of roads will be closed to vehicles from around 12.15pm to 13.20pm on Friday 20 September. These are: â¢Pennsylvania Road (from junction with Prince of Wales Road / Union Road to roundabout), â¢Longbrook Street (from roundabout to York Road junction), â¢York Road, â¢Sidwell Street, â¢High Street, â¢South Street, â¢Western Way Roundabout, â¢Holloway Street, and â¢Topsham Road On-street parking and residents parking will be suspended from 9am to 1pm along Pennsylvania Road. Haytor, Dartmoor - The B3387 Station Road Roundabout, Bovey Tracey to Hemsworthy Gate, Dartmoor, will be closed to vehicles from 9pm on Thursday 19 September to 7.30pm on Friday 20 September. On-street parking will not be permitted. There will be a rolling road closure on the A382 from Moretonhampstead to Bovey Tracey, when the race is expected in this area at around 2.20pm. Haytor car parks will be closed from 9pm on Wednesday 18 September to 7.30pm on Friday 20 September. Cold East Cross to the junction with the A383 will be one-way (southbound) from 2.30pm to 4pm (southbound) on Friday 20 September and no parking will be permitted from 5am to 4pm.