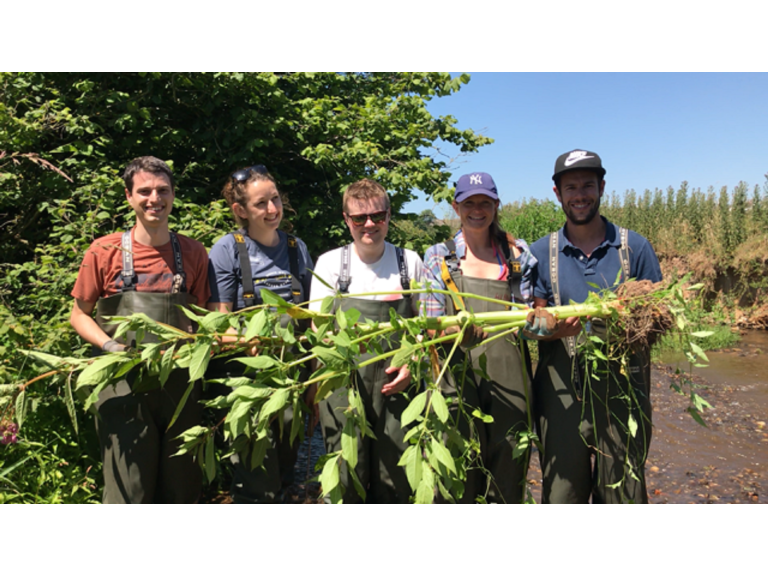 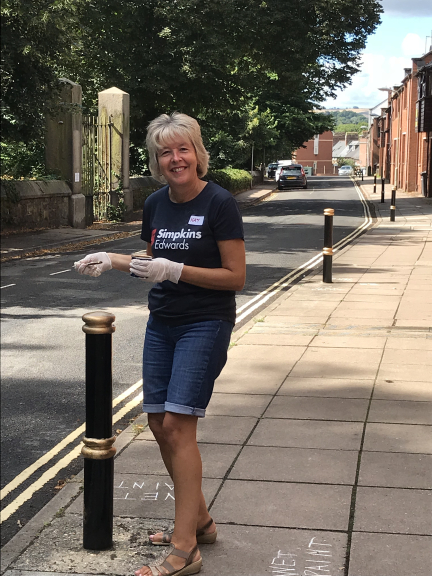 Chartered accountancy firm Simpkins Edwards, which has offices in Exeter, Honiton, Okehampton, Holsworthy, Bovey Tracey, and Barnstaple, has marked its 50th Anniversary this year with a host of volunteering days across the county this summer.  From clearing Himalayan Balsam on the banks of the River Tale, to painting Exeter’s iconic cast iron bollards black and gold, dozens of staff from the firm have been out and about, making a positive difference to local communities.

In Exeter, a team of eight staff visited St Mark’s Church to give its hall a much-needed redecoration, while a further team of seven joined St David’s Neighbourhood Partnership to paint bollards on Richmond Road gold and black, and cover wheelie bins with floral and leafy coatings.

Lynn Woodward, Senior Partner at the Exeter head office, commented: “It’s great to be giving back to the local communities in which we work.  When we discussed how best to celebrate our 50th Anniversary, it felt right to give our staff the opportunity to take time out from their busy working week to put back in to the communities that we’re such as big part of.

“The whole experience has been humbling, enlightening and great fun, and it’s wonderful to stand back and see the difference that we have been able to make together as a team.”

In June, a team of nine joined The Tale Valley Trust to clear the banks of the River Tale of the invasive Himalayan Balsam species, which has been an issue for the Trust for the past 13 years.  In addition to clearing field irrigation systems and removing nettles and brambles, the team retrieved weeds from beneath bridges enabling the water to run free.

Mark Simic, Partner at Simpkins Edwards’ Exeter office, commented: “We had a fantastic day.  It was incredibly hard work, but well worth the effort, as we were able to spot a wide variety of wildlife, including water vole, and see clear evidence of the active beaver population.  These are both signs of a healthy river, which is largely down to the hard work of the Trust and support of the local land owners.”

In July, a team of eleven helped the 1st Okehampton Scouts paint their hut, clear overgrown ground and lay gravel.  A lack of volunteers had previously held up the work however, with Simpkins Edwards’ help and the generous donation of £2,500 towards materials from their client Okehampton United Charities, the job was completed on the day.  Now, the Scouts have a transformed meeting area for the 60 Beavers, Cubs, Scouts and Explorer Scouts who regularly meet there.  They even have a cleared outdoor space in the woods at the back of the hut where there’s a new firepit to sit around for traditional sing-alongs.

Seb Beard, Partner at the Okehampton office, said: “The Scouts is a great institution.  Many of our staff have children that are in the Scouts or have been in the Scouts so, for us, it was a natural organisation to approach to see how we could help.  It’s incredible what can be achieved in a day.”

Jo Tope, Senior Manager at the Holsworthy office, commented: “We had a wonderful day transforming and reviving the outside area that’s enjoyed by the elderly residents at Abbeyfield.  It was great to see so many smiling faces and to know that, through our work, we’d made a significant difference to the environment that they enjoy on a daily basis.”

In early August, 17 of Simpkins Edwards’s staff joined Rowcroft at their main sorting and distribution centre in Newton Abbot.  Over the course of three days, Simpkins Edwards’ team processed 250 bags of recycling, packed and sent 40 clothes boxes to the charity’s shops, assisted in the processing of 450 clothes bag boxes, tested 60 electrical items for resale, and scanned and checked 300 DVDs and CDs.

Julie Rose, Branch Manager of Simpkins Edwards’ Bovey Tracey office, commented: “Rowcroft Hospice does an incredible job caring for people with life-limiting illnesses such as cancer, heart disease or MND.  Each year they help more than 2,000 people across South Devon so, for us, it was a genuine honour to meet and work with their team.

“We were astounded by the high quality of the donations, and delighted to know that in just three days we helped to process items with an estimated value of over £4,000, all of which will help to fund the amazing work of Rowcroft’s carers here in South Devon.

Further volunteer days, which are taking place in August, include a project to revamp Barnstaple Sea Cadets’ main building.