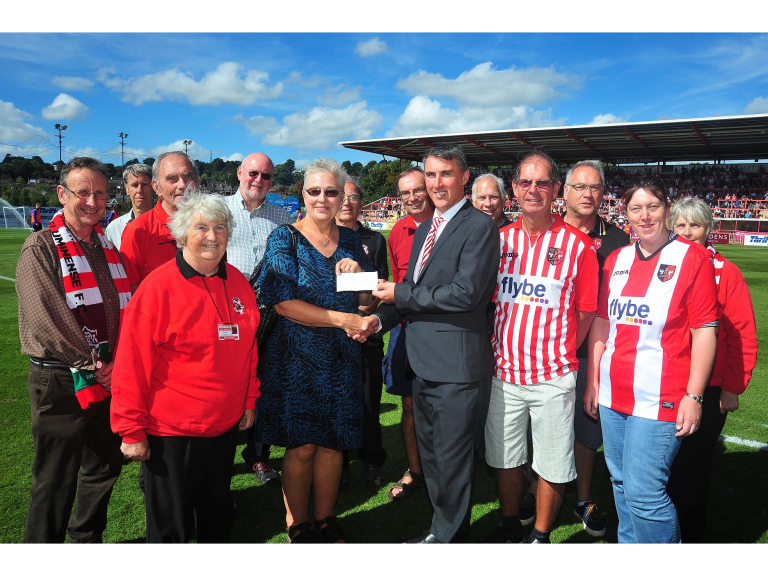 Grecian Goal, a fundraising initiative, is always on the lookout for new pledgers to support important causes at Exeter City FC.

There are currently over 40 pledgers who contribute funds in a bingo-style fashion, and have some fun in doing it. Pledgers set their own terms and conditions, ranging from the sensible to the eccentric – some past examples of pledges include £1 per goal scored by City, and £10 if a seagull lands on the pitch whilst the game is in progress.

In the last seven years, Grecian Goal has raised over £14,000 to support the club. The funds have been put towards small specific projects that benefit either the fans or the team. Money has been raised for Pitch In, an iPad to aid the coaching staff, floodlight repairs, signage around SJP, the Memorial Garden, cookers for the kitchen, the PA system and GPS kits for players.

Grecian Goal was originally the brainchild of former Stadium Manager Dacre Holloway, as a way of raising money for the club. His first Grecian Goal funded project was to drain the then very boggy, training pitch at the Cliff Hill training Ground.

It seemed a shame to let such a practical fundraiser cease after Dacre's untimely death, and it was revived in 2009 by Elaine Daivs.

This year, the running total raised is currently an impressive £1543, partially due to City’s recent goal scoring exploits which have seen 29 goals scored in the 12-match unbeaten streak.

Grecian Goal has contributed to the success of the appeal to fund GPS tracking kits for each player, sponsoring Jake Taylor’s. The kits have helped with the upturn in form as they allow the physios to track, measure and refine the player’s fitness and performance.

The physio's have requested for further funds for ‘add on’ kit that is specifically for knees and hips and Grecian Goal is looking to support this.

Grecian Goal’s most recent success was the presentation of new, branded coats for the volunteer matchday ambassadors at half-time on Saturday, February 4, when City took on Crewe Alexandra at St James Park.

Elaine Davis, Grecian Goal coordinator said: “The ambassadors do such a great job and enhance our reputation with new and visiting supporters.

"I'm happy that Grecian Goal has been able to support their efforts and am proud that ‘supported by Grecian Goal’ has been embroidered on the coats.”

If you like the idea of Grecian Goal, then please get in contact with Elaine Davis via email on: goalgrecian@gmail.com or call 01392 875804