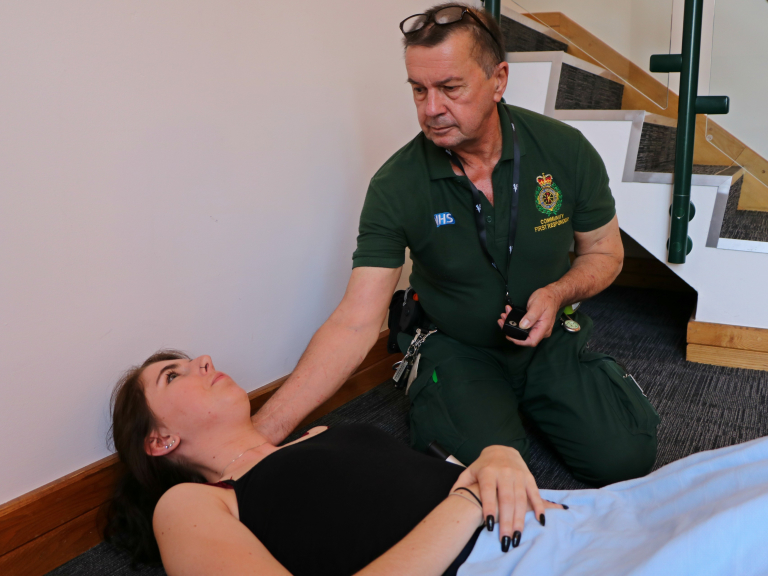 More patients are being treated at home rather than in hospital, thanks to a new South Western Ambulance Service NHS Foundation Trust (SWASFT) initiative.

Hundreds of Community First Responders (CFRs) across the region are now responding to 999 calls in which patients have fallen, not injured themselves, but are unable to get up.

With the use of a Raizer emergency lifting chair and supported by clinicians, Responders can move patients from the floor to a sitting or standing position.

The initiative aims to ensure that the most appropriate resources are allocated to emergency incidents, enabling ambulances to be sent to patients who have the highest clinical need.

The scheme has been shortlisted for the Care of Older People accolade at the Patient Safety Awards 2018 on Monday 9 July.

Rich Buckley, SWASFT Acting Responder Manager, said: “This initiative enables our Responders to further support their communities in a robust and safe way.

“With clinical support from our 999 Hubs, patients can be safely assessed and lifted from the floor in a more timely manner. Patients will receive care in their own home by a trained Responder who has the equipment and expertise to provide the help they need.

“Our volunteers give their time freely to help support SWASFT and our patients; without them this fantastic scheme could not work.”

According to clinical research, one in three people over the age of 65 who live at home fall during a 12-month period.

Non-injury falls patients had faced lengthy waits for an ambulance, because their call was not high priority.

The concept was developed in 2017 as a way to attend and assess these patients more quickly, using the skills and experience of CFRs.

The process is supported by clinicians in the 999 Control Hub, who are authorised to discharge the patient on scene after discussion with the Responder.

Nigel Toms, an experienced CFR, tested the idea by attending a selected number of appropriate incidents with a lifting device. He was able to manage the vast majority of the calls effectively, without needing any additional crew.

During a six-month trial involving more than 300 incidents, around three in four patients were successfully treated at home without the need for an ambulance to attend.

More than 60 CFR groups in the South West are now participating in the scheme.

The initiative provides numerous benefits including: an enhanced response to patients, increased skill set of responders, financial savings through not needing to send ambulances, and a proactive response to the ageing population.

CFRs are volunteers who are trained by SWASFT to attend emergencies within their local communities.

They respond to particular types of 999 calls where it is essential for the patient to receive immediate lifesaving care. These include conditions such as cardiac arrest, chest pain, breathing difficulties, unconscious patients, fitting and stroke.

There are almost 1,000 CFRs who donate their time to provide lifesaving support for patients across the region.

SWASFT covers one of the most rural areas of the UK, and is committed to providing the population of the South West with the highest standard of out-of-hospital care.

Always call 999 in a medical emergency – when someone is seriously ill or injured and their life is at risk.