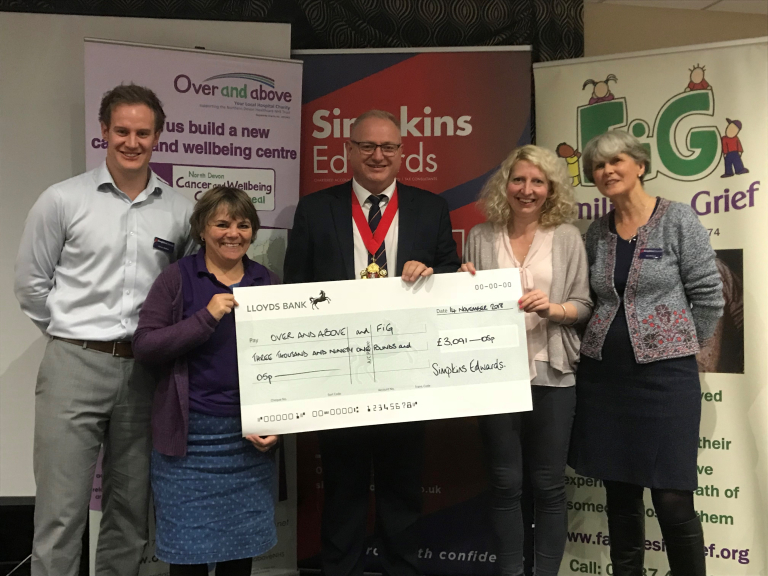 Barnstaple’s 9th annual Really Big Quiz, hosted by local accountancy firm Simpkins Edwards, has raised over £3,000 for the Mayor of Barnstaple’s charities of the year.

The quiz - held in aid of Over & Above: The North Devon Cancer and Wellbeing Centre Appeal, and Families in Grief - saw a packed hall fight it out for the title of North Devon’s brainiest quiz team.

Added to the previous eight years of fundraising activity, it brings the total raised by the Barnstaple Really Big Quiz to more than £27,000, which has been used to support dozens of worthy, local charities.

At the interval James Morrish of Kivells held a gripping auction with the top item for the night – afternoon tea for two at Kentisbury Grange – going for the princely sum of £90.  This was followed by alegendary and hilarious game of ‘Heads or Tails’, bringing in a further £150.  Together with the auction and money raised from entry fees, this helped boost the total raised on the night to £3,094.05, including a record-breaking £711.34 generated by the raffle.

Commenting on the success of the event Jilly Watson, Partner at Simpkins Edwards, said: “We’d like to thank all the local businesses and entrants that attended and donated prizes to The 2018 Really Big Quiz.  With their help, we have once again raised thousands of pounds in a single night for two very important local charities: Over & Above: The North Devon Cancer and Wellbeing Centre Appeal, and Families in Grief.”

The Mayor of Barnstaple, Cllr Ian Roome, added: “The Really Big Quiz is a fantastic institution, which has become a key fundraising event in the North Devon and Barnstaple business calendar.

“I would like to thank Simpkins Edwards who organised and made the evening possible, James Morrish who once again did an amazing job of running the auction and raffle, and the Barnstaple Sea Cadets who helped dish out raffle prizes, collect money and gather answer sheets throughout the night.  I would also like to offer huge thanks to all those that delved deep and donated so generously on the night.”